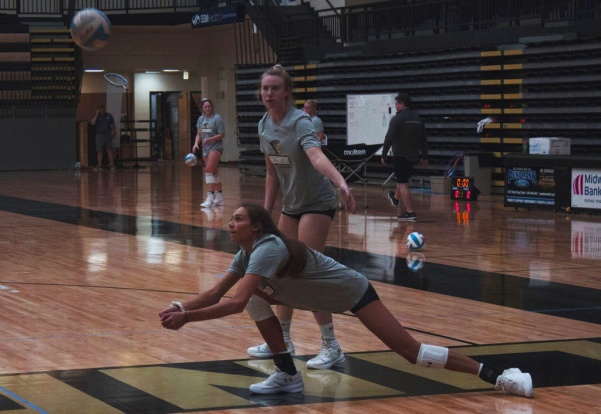 Freshman Mackenzi Sifuentes bumps the ball up in a drill while Sophomore Sadie Kosciuk waits for her turn during practice.
Photo by Lindsey Fiala

The Lindenwood women’s volleyball team will look for its eighth win of the season Friday when the team heads to Lebanon, Illinois, to take on fellow Great Lakes Valley Conference team McKendree University.

The Lions started off this season with six consecutive wins, but lost their streak to No. 7 Northern State University with a tough 0-3 match last Saturday. However, the Lions bounced back later that day to sweep the University of Mary 3-0. The Lions are now 7-1 for the season.

Sadie Kosciuk, a middle hitter from Wisconsin, was named to the all-tournament team with fellow teammate Kat Finnerty, a middle blocker.

“Kat and I were very thankful and couldn’t have done it without all of our team there,” Kosciuk said.

“The win streak is motivating us very hard, our team broke some barriers last year, and we plan on breaking down more as the year continues, working as one to achieve what other think could be impossible for us,” Kosciuk said.

Head coach Will Condon said the team still has some areas to work on and improve, but the athletes are willing to continue to work hard.

“If we continue to do what we have been doing, I think we could be really successful,” Condon said. “We have to be able to play one match at the time, and if we do have a bad one, move on and get ready for the next one.”

The Bearcats currently have one winning streak and are 4-4 overall for the season.

Saturday, the Lions play another road match against University of Illinois-Springfield, before returning to Missouri next weekend to face Northwest Missouri State University.