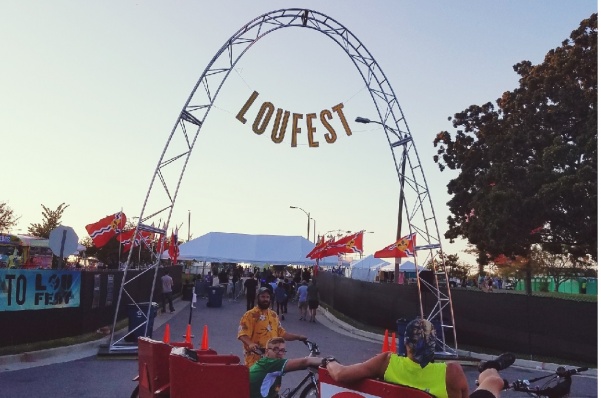 Even though LouFest was canceled for this weekend, events are popping up all over St. Louis that feature vendors and artists scheduled to play the festival.
Photo by Kayla Drake

Hours after the announcement that LouFest was canceled, events that feature artists scheduled to play the St. Louis music festival were announced.

The first of the festivities is on Sept. 8 at Delmar Hall. Jukebox the Ghost, Mt. Joy and Zach Sullentrup will be playing. Doors open at 7 p.m., and the show will begin at 8.

Tickets for this show are $22 in advance or $24 at the door. Tickets can be purchased online through Ticketmaster, in person at the doors or at Suite 100 at The Pageant. All tickets purchased with cash at Suite 100 will be discounted to face value. Concertgoers who are younger than 21 will be required to pay a $2 surcharge.

Already selling out this show, The Head and Heart will also be playing Delmar Hall on Sept. 9. Doors open at 7 p.m., and the show will begin at 8.

Right next door at The Pageant, Robert Plant and the Sensational Space Shifters will be taking the stage at 8 p.m.

Tickets for this show are $49.50 in advance or $59.50 at the doors. Balcony tickets begin at $75. Tickets can be purchased online through Ticketmaster, in person or at Suite 100 at The Pageant. Concertgoers who are younger than 21 will be required to pay a $2 surcharge. Tickets will go on sale at 7 p.m. Thursday.

The Sound of St. Louis is a showcase that will be held at the Grandel Theatre in Grand Center on Sept. 9 from 2-10 p.m. Two stages will host more than a dozen bands that were scheduled to play LouFest. This event is free.

All weekend on Cherokee Street, STL Style House and Golden Gems have teamed up to host a pop-up shop. The two vendors also were slotted to attend LouFest and invested thousands of dollars into the making of the merchandise. Food, drinks and other vendors, such as Schlafly, will be in attendance.

Arch Apparel will be hosting a party at its Crestwood warehouse location on Sept. 9 from 10 a.m. to 6 p.m. Narwhal’s, Kaldi’s and Juice Bar, other vendors scheduled for LouFest, will be at this event. More information and a full list of vendors and performers can be found on the event’s Facebook page.

At the Boat House in Forest Park, a mini-event called Just Lou It from 9 p.m. to midnight on Saturday will have two stages and feature more artists on LouFest’s lineup.

Tickets for Just Lou It are $10 in advance and $13 at the door. This event is for attendees 21 and up only. More information and a list of bands can be found on the event’s Facebook page.

Lastly, comedy performers scheduled for LouFest will be having an event.

We Are Live and Southtown Pub are hosting Last Laugh Comedy Continues on Sept. 8 from 2-8 p.m at the Southtown Pub. More information can be found on the event’s Facebook page.