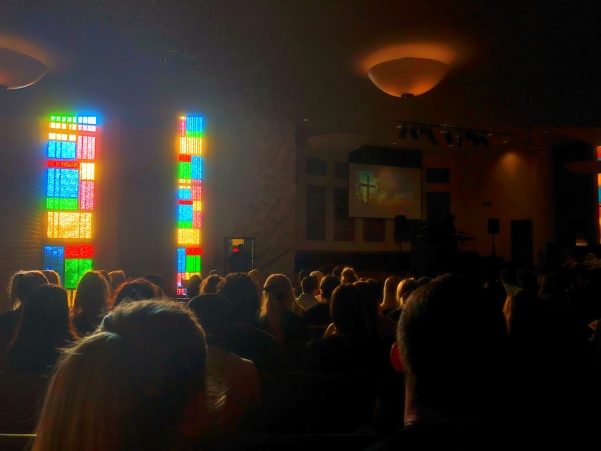 Blocks of late afternoon light filtered through the stained glass windows, creating a hazy rainbow over the crowd of students, faculty, friends and family gathered to honor the life of Hamilton Marufu.

The crowd, wearing suits, dresses and athletic clothes alike sat quiet and still except for the occasional hushed murmur and the soft brush of skin on skin as tears were wiped away and hugs given out.

A picture of Marufu from the rugby roster smiled brilliantly in the front of the room, accented by large bouquets of colorful flowers.

The memorial service, held at the Lindenwood University Cultural Center on Sept. 6 celebrated Marufu’s lasting legacy through song, prayer, scripture and words of remembrance from his loved ones.

On July 28, Marufu, 23, died of an apparent suicide in San Antonio, Texas where he was working as an account manager at Project Nia, Inc., a marketing and sales firm.

The Zimbabwe native studied international business at Lindenwood University starting in 2013 and played on the university’s rugby team.

Eight of Marufu’s loved ones, including his girlfriend and mother, spoke to the crowd, sharing memories of their times with him. They described his outgoing, fun-loving personality and the way his faith shined through in every aspect of his life. They commented on his willingness to offer help to anyone, and his steadfast friendship.

“Raise your hand if you think you look better than Hamilton in a suit,” said Marufu’s former rugby coach Josh Macy. The crowd remained still and a ripple of laughter broke through the reserved attendees.

Through a tear-soaked prayer, Marufu’s girlfriend, Mary Walton, described her first encounter with him and how everyone must be “Hamilton strong.”

“I had the honor of knowing, loving and being loved by Hamilton,” said Walton. “We met at a time in my life when I was experiencing serious health issues, and it was visible.”

“I had never spoken to him before when he stopped me in the cafeteria and said he could see I was suffering, that he was praying for me and that he would continue to check on me every time he saw me. I asked who he has, and he told me he would tell me next time he saw me, flashed his little brilliant smile, and walked away,” she said.

Dr. Shane Williamson presented the framed roster picture of Marufu to his family and Rev. Nicole Torbitzky ended the memorial with a closing prayer.

“It’s up to us to spread the joy and happiness he made us feel,” said Marshall Shill, one of Marufu’s friends.