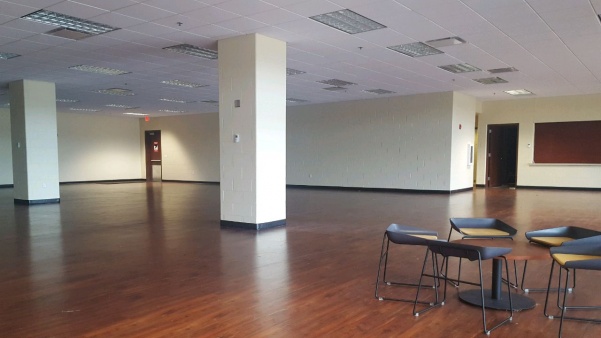 The space next to the computer lab in Spellmann formerly contained offices for the School of Health Sciences and a lounge. In the future, it will become a "collaboration area" similar to those in the LARC. Photo by Matt Hampton.

Among the extensive changes being made to Lindenwood’s campus this year is the creation of a student collaboration area outside of the computer lab in the Spellmann Center.

Students returning in August may have noticed the area inside the doors facing Hunter Stadium on Spellmann’s first floor has been expanded and remodeled.

Diane Moore, vice president of operations, said the student collaboration area will not be “specifically designed for formal instruction,” but will include a presentation area and places for students to study, similar to areas in the Library and Academic Resources Center and other buildings.

“Within universities, that’s what students want more and more of, so we’re trying to provide the opportunity for more informal student collaboration opportunities,” she said.

Moore added that the ongoing work on the third floor of Spellmann should finish in October. Furniture is projected to be moved into the rooms the first week of October, and staff and faculty will move in the following week.

The third floor will include a “one-stop shop” with offices for business, academic affairs, student financial services, admissions and international student affairs.  The International Student Affairs Office was relocated temporarily to the basement of the Welcome Center this semester until the renovations are done.  The other offices will remain in their previous locations until moving to Spellmann in October.

The International Student Affairs Office was located in Spellman two years ago before it moved to the LARC when it opened.

The modifications to Spellmann are expected to cost over $800,000 and displaced Arts, Media, and Communications classrooms on the third floor, as well as the Title IX office, which moved to the LARC.  Other AMC spaces remain on the fourth floor, while the journalism lab, LUTV classroom, and AMC offices were moved to the basement of McCluer Hall, a former dorm in heritage campus.

McCluer, where humanities faculty also moved from the currently vacant Butler Hall, underwent an update estimated at over $350,000.  Also on the old side, the summer renovations included a $2 million dollar renovation of Niccolls Hall, which now houses four fraternities, and the creation of a Makerspace in Butler Loft to replace off-campus art spaces in Studio East and West, which are closed.  Air conditioning was also added to the Field House, and athletic facilities in Hunter and the Hyland Arena were updated over the summer.

Moore said that a major reason Lindenwood embarked on so many projects this year is due to the pressing need for maintenance of older buildings.  She said Niccolls may not have had significant renovations since the 1980s. There is a vintage elevator in McCluer which stopped working decades ago.

The updates this summer are only the “first step” to update the facilities, she said.  Next summer, they plan to modernize the “antiquated” HVAC systems in McCluer and historic buildings.