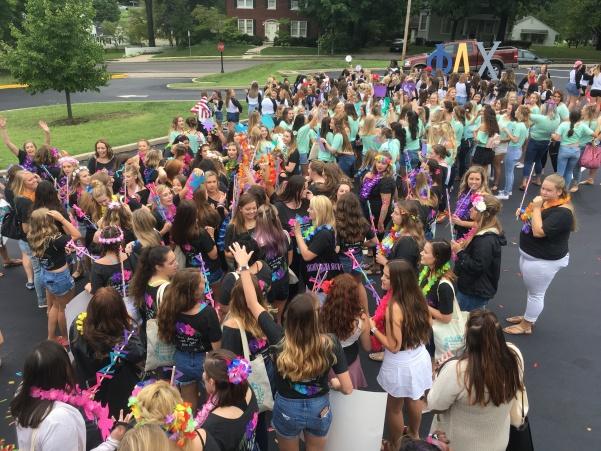 On this day, the women who spent their week attending meetings and rush events found out if they were accepted into one of the three sororities at Lindenwood. Each woman was given a “bid” by the sorority that chose her, and then she had to decide if she wanted to accept the bid or not.

Director of Greek Life Christopher Miofsky said the day started at Harmon Hall with a continental breakfast. Each potential new member then went over her bid with someone from the Office of Greek Life before deciding whether to sign the bid. After the new bids were signed, Miofsky gave the new pledges a one-hour seminar on “all things Greek.”

“It is something a student only truly experiences after going through Recruitment,” Miofsky said, “[It] really gives a student a chance to see if Greek Life is something they can benefit from.”

Once the formalities are taken care of, the women were able to join their sisters as they parade across campus singing and cheering towards their individual chapter rooms. From there, the women spent the day getting to know their sisters and their chapter.

“I wanted the new members to feel welcome coming home,” Phi Sigma Sigma recruitment chair Jordan Lockhart said. According to Lockhart, as well as the other sorority recruitment chairs, a lot of hard work and very little sleep goes into prepping for Bid Day.

“It was a lot more relaxing than I thought it would be,” new Sigma Sigma Sigma pledge Grace Goodwin said about Rush Week.

Each sorority made it clear that while Rush Week can be long and tiring, they firmly believe it’s something worthwhile to go through if someone is interested in Greek Life. “at the end of the day [rush is] so worth it; everyone has fun,” Lockhart said.

Durr said that Bid Day, “gives new members a little nudge further into the organization they chose so they don’t feel as if it’s just a free fall. It helps us get to know them while fostering a love for our organization.”