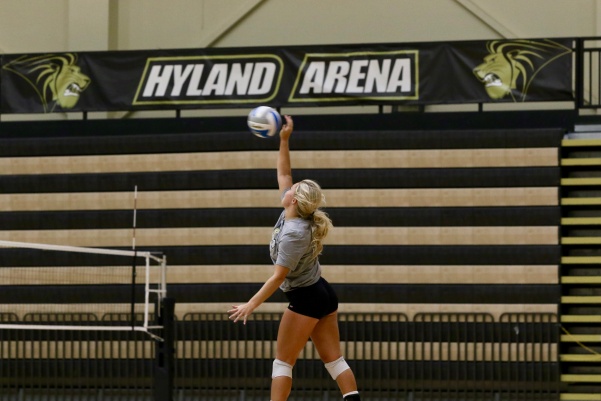 The Lions were defeated in three straight sets at Northwest Missouri on Friday.  And they lost again to MIAA champions Missouri Western the following day.

On Friday, sophomore Sadie Kosciuk led the offense with 11 kills and a .647 attack percentage. Outside hitter Bailey Dvorak followed with nine kills total.

“We played too passively and once things started to click, we were more aggressive, but it was too late,” Dvorak said.

Coming into their second match of the conference on Saturday, the Lions were trailing two sets down to the Missouri Western Griffons, but bounced back and won the third, then narrowly lost the fourth set.  The game ended with sets of 25-23, 25-22, 18-25 and 25-21.

“We need to finish strong as a team,” Dvorak said. “We have a lot of technique type skills to work on this week in the gym, and we need to get our mind right for this week’s competition.”

Allyson Clancy recorded 42 assists in the match and led the Lions with four aces. According to the Lindenwood athletics website, this is the second time Clancy surpassed 40 assists.

Clancy said that assists are part of her duty to her team and if she earns a good number it’s because she is playing for them.

“I am much more confident in my level of play from today, and I feel like it set the tone for the team’s attitude overall,” Clancy said. “The overall outcome was nowhere near satisfying, but I know if I can continue my level of play, I can lead this team to success.”

The Lions have an overall record of  8-4 and are 0-2 in MIAA conference action. The next match will be on Tuesday, Sept. 18, at 6 p.m. at the University of Central Missouri.  After that, they will play two home games in Hyland Arena on Sept. 21 and 22 against Washburn University and Emporia State University.