Lindenwood has an independent record label 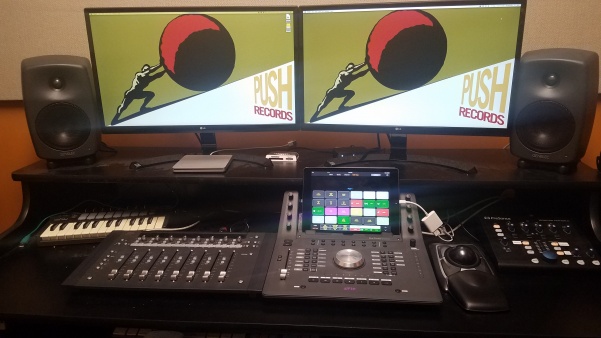 The current workspace in the control room, complete with a mixing board and speakers.
Photo by Kayla Drake

For five years, two professors have been working to create a studio that is a destination program for the music business major.

Push Records, Lindenwood’s independent record label, is the result. Music instructor Adam Donohue and assistant music professor, Matthew Hoormann created the label two years ago and since have used the space as a hub for two capstone projects.

A 6-foot-by-6-foot music production workspace with a board, speakers and screens, along with mixing capabilities is the fruit of those five years.

“When someone from the outside sees this it’s like ‘really?’ But when I see this, I see the potential,” Hoormann said.

The music business capstone combines Production ll and Business ll, splitting the class into two teams to handle the managing and engineering sides of the business. Hoormann handles the business side and Donohue the production side.

The goal is to scout two bands then edit, mix and master three songs from the bottom up. During the recording process, students are also expected to develop the band’s brand, social media presence, trademark the name and create a website. Students can even talk to the bands about their “look” and create inter-band contracts, Hoormann said.

“Ideally, when it’s all done you could conceivably have a product that if the band wanted to, they could monetize it,” Hoormann said.

Senior David Walsh, who took the capstone last semester, said at first his team underestimated how long it took to produce a song and by the end, the team was working 40-plus hours a week.

To produce a song, each instrument and vocalist needs to be tracked.

Another senior, Alex Johnson said the psychology behind working with a band is harder than it seems.

“You have to really communicate things in a certain way because you’re dealing with someone’s creation,” he said. “You can’t take it lightly.”

This semester the program was approved to get an 8.5-foot-by-14-foot sound isolation room, which would function as the new control room. It will provide more room for teaching because the current room fits four people. The room is expected to be installed within the month.

Financial limitations have prevented Donohue and Hoormann from making the studio a complete project.

Donohue said he hopes to add colored lighting for control rooms, flat screens above the workspaces and a new professional board that will cost between 50 and 100 thousand dollars.

“It’s kind of like planting a seed,” Hoormann said. “In the meantime, our students have quality gear, that gives them a real glimpse of what it could look like.”

Donohue said he has a vision to integrate the entire Scheidegger Center – LUTV, music recording and theater performances. The project would total $2.5 million.

“We’re talking about connection,” Donohue said. “We could have an 80-piece orchestra backed pop singer and we could multi-track record that in the studio.”

Donohue said ticket sales for live performing is down, but views on videos of live performances are up.

“The quality of video and audio we get is so good, it’s like ‘Why do I need to go see the band?’ he said.

Hoormann and Donohue’s years of dedication inspired the record’s logo. It shows a man pushing a boulder. In Greek mythology, this man was known as Sisyphus.

“He was sentenced every day to push a boulder up a mountain and each day it would roll back down, and it would never be done,” Hoormann said. “It’s that idea of accepting the struggle and continuing to push the boulder up the hill and finding joy in the struggle.”

Hoormann said at first the name was “tongue in cheek” because over the course of five years, both professors felt like the boulder kept rolling back down.

“Now it’s more of a positive thing in that all of our students – any student, anywhere, has their own boulder to push. As long as you keep going and find some joy in the struggle there, then you can keep going and it doesn’t feel so futile.”

Donohue said music business is shifting to become the cornerstone major of the music program, out of education and performance.

“It represents that 21st philosophy that is now our mission statement,” he said.

Walsh said his team worked “extremely hard” on the final product and he was proud of the results.

“Professor Donohue and Professor Hoormann are working to get [the program] to where it needs to be, but it’s really revolutionary,” he said. “Where they are wanting to take it is going to be really awesome.”

Currently, the program is looking for bands, either students or musicians in St. Louis, that want to participate in the capstone project next semester.

“Susie Creamcheese in whatever major, if she’s a singer in a band, they could work with our business students, and it wouldn’t cost them a thing,” Hoormann said.

Stickers are also available of the Push Records label. Students can stop by Hoormann’s office to pick one up.