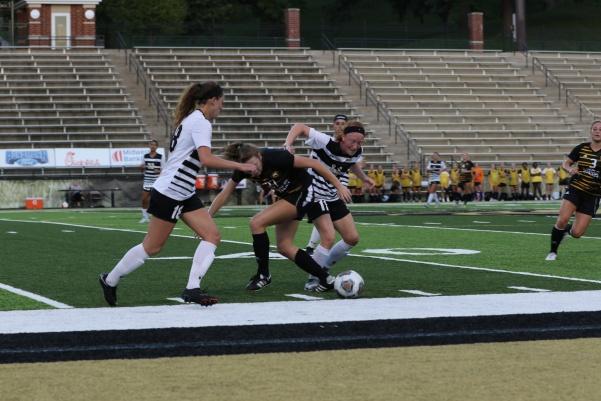 Junior Sammi Gregory (11) and sophomore Alaina White struggle for possession with Missouri Western forward Kelsey Burkey during the game on Sept. 14. Gregory tallied four shots for the Lions in the match.
Photo by Maria Escalona.

Both teams went in to the contest with two victories this season, but MWSU racked up three goals in the second half to secure the third win in Hunter Stadium.

The first half was hotly contested, with the Lions outshooting the Griffons 5-3, but the half remained scoreless.

The game started off with a shot on goal less than two minutes in by Lindenwood defender Alaina White, and a header shot by midfielder Sammi Gregory which sailed over the top bar.  Gregory lead the Lions with four shots, all of them in the first half, but only one on goal.

In the 10th minute, forward Cassidy Menke took the first shot on behalf of the Griffons, but Megan Swanson blocked it.  Swanson totaled six saves for the Lions, helping to spare them from MWSU’s onslaught in the second half.

The Griffons escalated their attack after halftime, outshooting Lindenwood 7-3.

Lions’ forward Katie Richter made two shots in the second half, one of them only two minutes in.

The first goal came with under 30 minutes left on the clock, after Menke took a shot at Lindenwood’s goal.  Swanson dove to block it, but forward Ashley Mathis scored on the rebound from five yards away.  Fresh off their lead, the Griffons’ forward Claire Meyers took an assist from Anika Nobs and dribbled past the home defense to bring the score to 2-0.

However, Lindenwood was able to avoid a shutout defeat.  With under five minutes left before the final whistle, forward Morgan Weller passed a corner kick from Jordan Wipke to midfielder Olivia Callipari, who scored the Lions’ only goal, her second this season.

But MWSU restored their two-point advantage in barely a minute when Menke scored the team’s third goal.

The loss brought the Lions’ record to 2-2-1. The team can hope to recover a winning ratio in their fifth straight home game at 1 p.m. on Sunday, against No. 1 conference team University of Central Missouri. Next weekend, they will face Northwest Missouri State University and then MWSU again in the Lions’ first MIAA match.