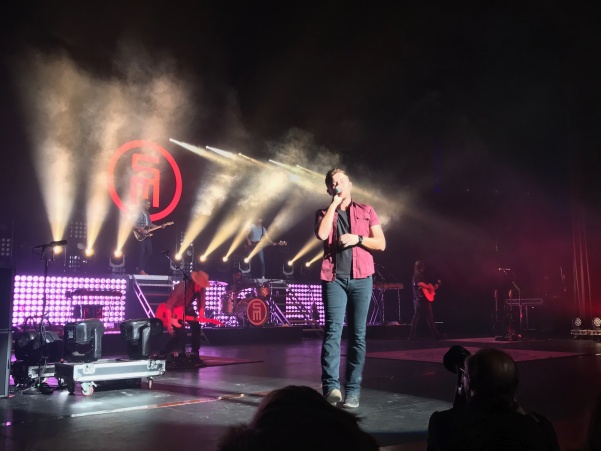 Scotty McCreery, winner of Season 10 of "American Idol" performed at the Lindenwood Theater in the J. Scheidegger Center for the Arts on Friday night.
Photo by Megan Courtney

A crowd of all ages filled the Lindenwood Theater on Friday night as they waited for Scotty McCreery to take the stage.

McCreery, who was the winner of Season 10 of “American Idol,” and youngest male winner of the show, was introduced by Bud Ford and Jerry Broadway, who have their own talk show on 92.3 WIL called Bud and Broadway.

The hosts briefly talked about the upcoming already sold out Jingle Fest and mentioned that there were going to be opportunities to score free tickets, but also brought up Hurricane Florence.

McCreery is from North Carolina, one of the states impacted by the storm. Bud and Broadway said even though McCreery was nervous for his family back home, he pulled through, and the show was still on.

He opened with a few songs from his newest album “Seasons Change,” which dropped earlier this year, and also gave a brief recap of how the year had been going for him.

In February, McCreery got the call from his label, Triple Tiger Records, that his single “Five More Minutes” was a No. 1 country single, and a month later, “Seasons Change” was the No. 1 country album.

As far as his personal life goes, he married his kindergarten sweetheart Gabi Dugal on June 16.

He said when his career started in high school, he was told that he couldn’t attend anymore, but he insisted on still going because he wanted to ask Dugal out; so Monday through Wednesday, he went to school, and Thursday-Sunday he toured with Brad Paisley.

Along with his own songs, McCreery threw in some of the classic country songs like “Take It Easy” by Eagles, “Forever and Ever, Amen” by Randy Travis, “Chattahoochee” by Alan Jackson and “Sold” by John Michael Montgomery.

While most of the crowd stood and danced from their seats, freshman Jessica Prowell said “15-year-old me is crying.”

“I voted for him on American Idol,” Prowell said “I’m about to cry. I feel like a proud mom.”

Prowell said she remembers making her parents vote for him on the show and being “completely in love with him.”

“I cannot believe I saw just saw him in concert,” she said. “I grew up listening to country music, so my life has been made.”

Towards the end of the concert, McCreery made his way over to the left side of the stage where he tossed a guitar pick to a young girl who was sitting in the front row.

Up in the balcony, a group of friends couldn’t stay still – or in their seats – as they jumped around to every song McCreery performed.

As McCreery thanked the crowd and walked off stage, a chant of “one more song, one more song,” could be heard echoing through the theater.

The lights stayed dimmed, and the crowd gave an ovation as McCreery returned to center stage to close out the concert with yet another classic, “Your Man” by Josh Turner.

McCreery’s band closed out the show as he left the stage, waving for one last time.