Lindenwood Then and Now: campus restaurants from years past 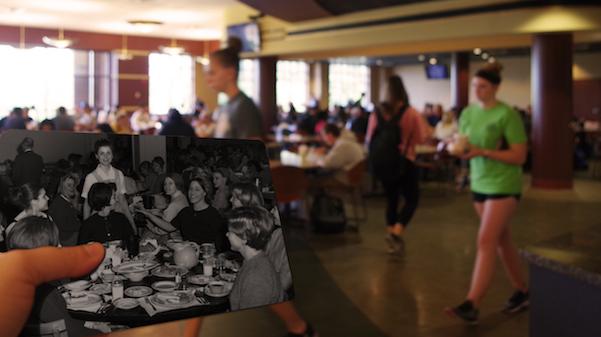 A photo of women in Ayres Dining Hall in 1966, with today's Spellmann Cafeteria in the background.
Archive photo from the Mary E. Ambler Archives.
Photo illustration shot and edited by Kat Owens.

Decades before Qdoba, Starbucks and Chick-fil-A came to campus, Lindenwood had other places to eat which are fondly remembered by students, staff and faculty from the 1970s and ’80s.

Besides Cobbs and Niccols Halls’ unofficial bars in the 1970s, there were other Lindenwood dining establishments which no longer exist.  Ayres Hall was once the place to catch a hearty meal, and there was also a restaurant called the T-Hole where students could grab milkshakes and snacks before it fell victim to a fire.
Ayres Dining Hall (1924-2002)
Until the Spellmann Center was built, a small cafeteria on the bottom floor of Ayres was the main eating spot on campus.

Before the 1970s, women were expected to wear formal attire to meals, but that tradition changed once men started living on campus.

Glen Cerny was a student who started living in Ayres in the fall of 1970 when it was one of only two men’s dorms.  He described the cafeteria in his hall as “the most beautiful setup in the world.”

“Like any place, when you eat there all the time, you get sick of it,” Cerny said. “I’m sure you would get sick of the stuff your mother would make and you would come back a little later and go ‘Wow, this is really good’, but at the time you were just sick of it.  All of us put on weight, so it couldn’t have been too bad.”

Cerny said over his years at Lindenwood as a student and later running Lindenwood’s KCLC radio station and teaching, the food improved, at least in terms of variety.

“I’d give the guys I was working with grief when they say ‘But dinner sucks.’ I’d say ‘Well, eat a big lunch.’ I mean you had all the cold cuts and bread and fruit and salad, so eat a big lunch, don’t [b***h] because you know you’re not going to like what they have for dinner,” he said.

Richard Reighard, a mass communications professor who was hired in 1987 to manage KCLC, said Ayres’ food was usually served by older women and eating back then was “like dinner at Grandma’s.”  Though he did not enjoy the mess hall’s meatloaf, other comfort food meals in Ayres were popular among students, faculty and staff, he said.

“To this day, I really miss their smothered chicken,” he said. “It was just pieces of chicken and somehow they came up with this chicken gravy kind of thing that was on top of it, and you had that with a couple scoops of mashed potatoes, and you waddle out of there with your belly full like, ‘Oh, that was good.'”

Reighard said students and faculty often ate together in Ayres, and students jockeyed for spots at their favorite professor’s table.  He remembers sitting as a student with his mentor, English, art, and communications professor Jean Fields, despite the fact that she “smoked like a stack.”

In the 1990s, President Dennis Spellmann changed Lindenwood’s dining system to cut back on food costs.

“I was really sad when they shifted gears,” Reighard said. “I understand why they had to because Spellmann’s idea was if we’re going to save Lindenwood, we’ve got to bring in more students, we got to turn it into a bigger institution, and we can’t afford to have Grandma serving food to 1,000 students.”

“The cafeteria experience kind of died after that,” he said. “A lot of people were like, ‘Well, I’m not going to go over to Ayres, because if the food’s horrible I’ll just cook ramen noodles in my trailer.”

At that time, excess students lived in trailers on the land that would become “new” campus.

A number of companies provided food at Lindenwood until Pfoodman, a company owned by Spellmann associate Ralph Pfremmer, was founded in 2000. The company was later renamed Pedestal Foods and continues to cook for the university today.
The Tea-Hole (c. 1921-2007)
The Tea-Hole (also called the T-Hole and originally known as the Tea Room) was a cozy restaurant in an old building in the quad near where the pavilion is today.

Reighard and Cerny said there weren’t as many places around town for students to eat in the ’70s and ’80s, back when Lindenwood had under 1,000 students and Route 94 was a two-lane highway. The Tea-Hole provided a convenient spot to grab a burger for college students in the tight-knit St. Charles of the time.

“On campus, most of us didn’t have cars, so we couldn’t go out and get something,” Cerny said. “We walked a lot of times.  There was a Pizza Hut down about where the football stadium area is now, and there was a couple restaurants that you could walk to, but we were pretty much stuck on campus for eating beyond the normal times.”

The Tea-Hole was in a building which was originally built in 1914 for the Eta Upsilon Gamma sorority where Niccolls now stands.  A few years later, the Gamma House was moved to across from Roemer Hall to allow Niccolls to be built.  But in 1920, students voted unanimously to ban sororities at Lindenwood, so the house became vacant.  According to a 1961 history of the building, this lead to the creation of the original Tea-Hole, which was “furnished with tables for two and four” and had yellow and orange decor.

In 1949, the Tea-Hole was moved to Cobbs Hall, and its old location became a house for the home management program.  In 1960, it was named the Ida Belle McCluer House (Not to be confused with McCluer Hall, erected in 1961 and named for President Franc McCluer and Ida McCluer, his wife.)

The restaurant would later move back to the McCluer House after home management was discontinued in the late ’60s. Reighard said that in the ’70s, a “prairie school ski lodge student center” was built connected to the Tea-Hole building, and English faculty partially moved into it.

But one night when Reighard was a graduate student, the building unfortunately caught fire.

“I don’t know what happened, old wiring or whatever,” he said. “It didn’t burn down to the ground, but it was a pretty smoky fire.”

Witnessing the disaster, he called the head of the English department. Reighard said other professors later showed up and watched the fire in horror.  The fire department extinguished most of the flames, but after the fire people decided the building was “a death trap” and eventually it was destroyed, Reighard said.

The Tea-Hole was also briefly located behind Niccolls and Sibley Halls around 1980.  The McCluer House was torn down in 1984, and university archivist Paul Huffman said in an email that the student center and The Gables, another building connected to it which housed offices and a bookstore, were demolished in 2007.

Since Lindenwood’s foundation as a girls’ college when Missouri had been a state for less than a decade, the school has had a rich and unique history.  This is the third article of Lindenwood Then and Now, a series about the history of Lindenwood. Last week’s installment, “Men first shook up campus 50 years ago,” told how and why Lindenwood College for Men was created in 1968, and the controversy it caused. Check back next week for more.