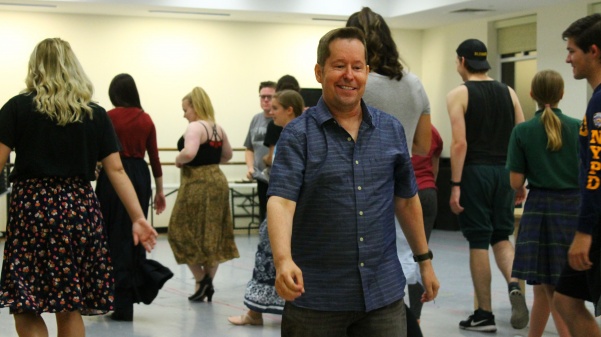 Dennis Courtney has been the director and choreographer for over 150 stage productions during his 22-year career.
Photo by Kayla Drake.

A broadway director who came to lead the “Mary Poppins” musical this semester, hopes to ignite a passion for the performing arts in students.

Dennis Courtney, who has directed and choreographed over 150 productions in 22 years, directs one student production each year. Courtney said he works with students on the brink of becoming professionals to teach them things they can’t learn in the classroom.

“It reminded me of why I do what I do, because [the students] love it so much,” he said. “They are so eager, so young and energetic.”

He started directing his first student production in 2009 at Southeast Missouri State University and progressed to the University of California-Los Angeles, Carnegie Mellon, Kent State, University of Cincinnati and more.

“To see the light go off in their eye when they learn something is thrilling to me, and I thought that’s how I’ll give back,” he said.

Stacy Blackburn, assistant professor and production manager for the theater department, said the program brings in a guest director every three to four years, so each class is exposed to working with a professional. The last guest director was Nikki Snelson for “Legally Blonde” in 2015.

Courtney himself was cast on Broadway as a teenager, in “Peter Pan” with Sandy Duncan in his first New York audition.

“At that age I was so full of love for doing it, and I was evidently much more talented than I even knew,” he said.

Courtney went on to act on Broadway and in national tours for 12 years, playing Benjamin in “Joseph and the Amazing Technicolor Dreamcoat,” and roles in “The Music Man,” “Gypsy,” “Starlight Express” and “West Side Story,” among others.

Senior Weston Lundy, who assists Courtney with choreography, said he looks up to him.

Years later after his first Broadway show, Courtney received a call from a producer, asking him to come direct “Peter Pan.” Courtney said he passed it up because he didn’t think he could handle the position.

“[The producer] called six months later and he said, ‘Well this is the last time I’m going to ask, and I think you would be really silly to pass this up,’” Courtney said.

Hesitantly, Courtney agreed to direct his first show, “Peter Pan” starring Cathy Rigby, an Olympic gymnast, and the show went to Broadway. He said it was like “baptism by fire.”

“I’ve realized that’s my real calling, what I really love doing,” he said. “And then I can perform if I feel like it on the side. It took away that pressure of having to be an actor all the time.”

Even though Courtney isn’t on stage himself anymore, he said he finds it more rewarding to sit in the audience and behold what he has created.

“When the audience applauds and goes crazy for something, I’m not up there, but I am,” he said.

“If you go to a show, everything that you see and hear and experience the director has had a hand in,” he said. “Which means that metaphorically, my fingerprints are on everything. Every set piece, every costume, every light cue.”

To celebrate the Scheidegger Center’s 10th anniversary, “Mary Poppins” will be the biggest show since the premiere season, with 28 actors in the cast.

Courtney said his favorite part of directing is rehearsals.

“The possibilities are endless,” he said. “You come into a room with, in this case 28 people, who you don’t know, except from the casting process, and you put together this wonderful experience for the audience.”

Lundy said each actor already has his or her own perceptions and ideas about the characters, but in rehearsals Courtney comes in and adds new elements to the characters, creating effective collaboration.

“We never have to worry that our director has that strong vision, because he communicates his vision clearly every night,” Lundy said. “We see what he’s going for, and then we can add on.”

Courtney said the first film he remembers as a child was “Mary Poppins.”

“I remember it being colorful and fun and entertaining, but I also remember, even as a young child, being emotionally touched by it, and I didn’t quite understand why,” he said.

Now, Courtney said he knows why “Mary Poppins” stirred his emotions: it is about relationships, family and caring for those less fortunate.

“If we can be entertaining and colorful and have a big spectacle and at the same time touch people’s hearts and souls, boy, how great would that be,” he said.

Blackburn said the students are coming into rehearsal more memorized than usual because the actors want to live up to Courtney’s standards.

Lundy agreed and said working with a professional director makes him as a student want to work harder.

“If anything that working with Dennis has taught the theater students is that if the bar is raised, the students will follow,” he said.

Courtney said even though he gets worried the students will tire out from heavy workloads from school and 6-10 p.m. rehearsal Monday through Friday, he is confident when you love something, it’s energizing.

“It’s like with me when I was younger, they don’t know how good they are,” he said. “Which is good because they don’t judge themselves or other people, they just do it.”

Overall the logistics and details of the production, Courtney said he is most excited for the students to experience 1,800 people applauding in the audience, come Nov. 1.

“I know what a hit show feels like. I know what success feels like,” he said. “I want them to know the satisfaction of having done the very best you could do.”

Editor’s Note: The article previously read that the event would be held on Nov. 18, but it has been changed to read Nov. 1, which is the correct date.