What to expect from this year’s student productions 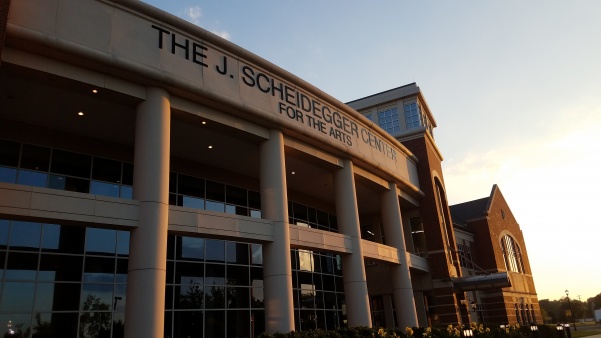 The Scheidegger Center has released its line-up of shows for the 2019-20 season.
Photo by Kayla Drake

This year celebrates the 10th season the Scheidegger Theater has been open.

The theater department decided to make the anniversary memorable; it will bring an array of five classic productions to celebrate a decade of performing arts.

Associate theater professor Emily Jones said this is to be a season of classics for everyone.

The play is a classic literature piece written by Arthur Miller in 1947. It is based on a true story during WWII about Wright Aeronautical Corp., which sold faulty aircraft engines to the military with the permission of three Army inspection officers.

“All My Sons” is set in the summer of 1947 and takes place over 24 hours. The drama is set between the Keller and Deever families. Joe Keller went free, while his business partner, Steve Deever was sent to prison for selling defective engine parts to the military. But Deever, an innocent man, went to prison while Keller remains free. Keller’s son Chris finds this out and carries guilt because he respected his father and is dating Ann, Deever’s daughter.

Larry Quiggins, the artistic director and professor in the theater department, opened Scheidegger’s first season and has been a part of the theater program for 20 years, longer than all other professors and faculty.

Quiggins said the play is “a modern Shakespearean tragedy” and has an intricate family with a simple plot.

“In my opinion, ‘All My Sons’ is the best-written play in the 20th century,” he said.

As a father, Quiggins said he can relate to Joe Keller and his decisions in the play.

“The dialogue is so real, the characters are so powerful, it’s just a wonderful play,” he said.

A classic children’s tale that most people recognize as a movie rather than a play is coming to the big stage. “Mary Poppins” has the biggest cast – 28 actors and about 30 crew members, since Scheidegger’s first season with the Scrooge production. For comparison, a typical student production has 30 members on stage and backstage.

To pull the show off, the department invited a guest director, Dennis Courtney, who has directed over 150 shows in the last 22 years and has been on Broadway.

Mary Poppins is a nanny and steps into the role for the Banks family. The children, Jane and Michael have cycled through several nannies and expect Poppins to fit the same mold. But the quirky woman, along with her counterpart Bert uses magic, morals and adventures to teach the children to value relationships.

“Mary Poppins” will also be the first time since the first season that actors will use the fly system. Audiences can expect to see Mary Poppins, played by senior Brie Howard, to embody the magical power as in the original film.

In order to use the fly system, which usually only moves sets, the department is hiring Fly by Foy to train stagehands how to use the mechanics safely. Quiggins said the two-three rehearsals of training will cost upwards to $4,000.

Quiggins said Mary Poppins has the potential to attract people who usually do not attend theater shows. The demographic for Scheidegger’s audience is 50-plus. Quiggins said the classics are always a hit with the theater’s target audience.

“I think right now with the place our country and world is at, we really need to hear a message of helping people who are less fortunate than us, who are different than us,” he said. “We may not have to agree on each other, but we can be kind to each other.”

A Lindenwood tradition for over 30 years, the classic is a “money-maker,” according to Quiggins.

Locals have come to expect the tall ornately decorated Christmas trees and red and gold lights of Scheidegger come December. Quiggins said every year the show sells out and fills the 1,800 seats in the theater.

“They expect it, they want it,” he said. “They want it classic and traditional. Every time we try to stray from that…pitchforks.”

“A Christmas Carol” follows Ebenezer Scrooge, a stingy moneylender who hates Christmas. On the eve of the holiday, Scrooge is visited by three spiritual guides: past, present and future. Throughout the night, Scrooge begins to soften and recognize the true meaning of Christmas and is redeemed into a cheery, generous man.

The classic Americana play won a Pulitzer Prize after appearing on Broadway in the late 1930s. The plot follows the trials and tribulations of a small town, as the name is fitting.

“Our Town” is based in Grover’s Corners, New Hampshire, a fictional town and starts off with the romance of two neighbors: George Gibbs and Emily Webb. Throughout the play the cycle of life – birth and death is portrayed, but the supernatural and after-life is also explored.

“Even though it’s set in the 1900s, there’s just so much that shows nothing has changed, which is something I think we need to be reminded of,” she said.

The cult classic film that came out in 1975. Since the premiere showing at theaters, a tradition of audience interaction has prevailed of bringing props to showings, such as a water pistol, confetti, rubber gloves, etc.

“Rocky Horror” starts off with a flat tire. The stranded young couple, Brad and Janet, seek shelter from a storm in a mansion, which is owned by transvestite scientist, Frank-N-Furter. Throughout rock musical numbers, featuring Frank-N-Furter’s wild household, Brad and Janet lose their innocence and the scientist unveils his latest experiment: a man named “Rocky.”

Quiggins said it is out of the box of any production the department has ever shown.

“If you would’ve told me 10 years ago that we were going to do ‘Rocky Horror,’ I would’ve been like ‘that’s never going to happen,’ especially 20 years ago, I would’ve laughed,” he said.

The next logical step after showing “Avenue Q,” which explores drinking, intimate relationships and purpose and has the song “Everybody’s a Little Racist,” was to show “Rocky Horror Show,” according to Quiggins. He said the department is moving towards doing more cutting-edge plays that have taste.

Quiggins said the show pushes the envelope and explores issues that are current, such as gender identity.

Senior Weston Lundy will be playing Frank-N-Furter and also does drag, performing as Lucy Couture.

The lesson behind “Rocky Horror,” Quiggins said, is the best freedom to have is to be who you are.

Blackburn said when the professors are planning the theater productions, at least a year out in advance, they take into consideration contemporary, classic and student suggestions.