Football to face 2-1 Emporia on the road Saturday 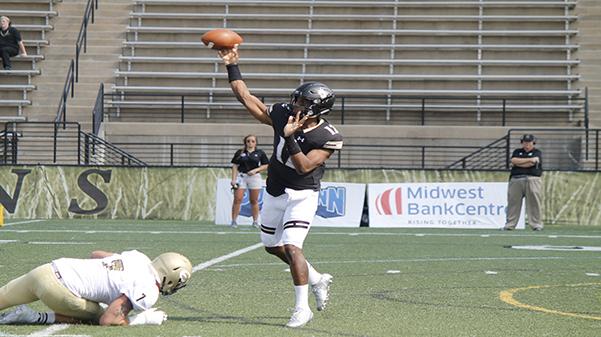 In a file photo from 2017, Quarterback Najee Jackson throws a pass vs. Emporia State. Jackson threw for 180 yards and two touchdowns and rushed for a touchdown on Oct. 14 in Lindenwood's 37-17 win.
Photo by Maria Escalona

The Lions will travel to Emporia, Kansas, to take on the Emporia State Hornets this Saturday afternoon.

Last week, the Lions dropped their second home game of the year 52-42 in a MIAA conference matchup against Central Oklahoma. Both teams combined for over 850 total yards of offense, while the Lions’ quarterback Cade Brister accounted for 94 percent of the Lindenwood offense, scoring three touchdowns, passing for 277 yards, and rushing for 115.

After three weeks, ESU’s record currently sits at 2-1, with wins coming from Northeastern State 34-7, and Nebraska-Kearney 20-17. The Hornets come into this contest after beating Nebraska-Kearney last week during a game in which they came back from a 17-0 halftime deficit. The Hornets’ only loss came to No. 15 in the nation, Pittsburg State 34-13 in their home opener.

ESU comes into this contest with a rushing attack that’s ranked No. 34 in the nation with 622 total yards on the season.  Senior running back Landon Vault’s 389 rushing yards places him No. 9 in the nation. Vault, the MIAA’s leading rusher, is coming off of back-to-back games over 100 yards rushing, including a career-high 177 rushing-yard performance last week against Nebraska-Kearney.