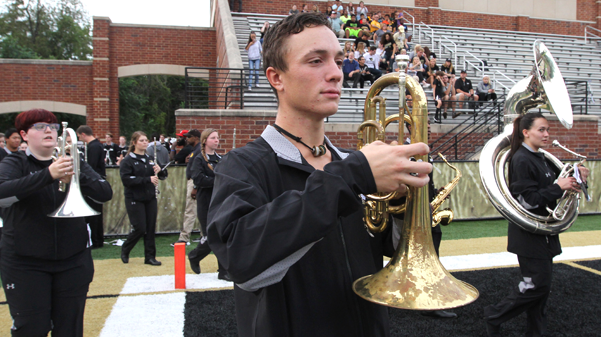 From left: Emma Stubblefield, Parker Bishop and Calyn Roth walk onto the field to perform at halftime during the football home opener vs Washburn University.
Photo by Don Adams Jr.

Game day looks different this fall with a new turf field at Harlen C. Hunter Stadium and updated uniforms and helmets for football players, but it also sounds different this year, with 40 freshmen joining the marching band and around 70 members receiving scholarships.

Since the athletics band lost its student worker program funding in 2016, the band dropped from around 140 members to 50 members the following year.

Senior associate athletic director Tom Wagganer said athletics decided to allocate scholarship dollars to the band because it is similar to the spirit squads and dance teams at Lindenwood.

“You can pipe in[…] the latest rock music or country music or hip-hop, but just kind of the sound and energy the band can create makes a difference at all sporting events,” he said.

Scholarships up to $2,000 are available to marching band students, depending on their financial aid. Before, student workers in the band earned $1,200 a semester.

The funding is not through the School of Arts, Media and Communications, but the athletic and concert bands director, Ryan Curtis, is appointed to recruit new members.

Enrollment management and athletics are still finalizing the scholarships for next year, but so far 55 students that have applied for Lindenwood class of 2024 marked they were interested in playing for the marching band.

The athletic bands are broken into two categories: marching band in the fall and pep band in the spring. Most of the time students participate in both bands.

Senior Kaylin Knost has been the drum major, or student director, of the marching band for the past three years. She was a freshman when the student worker program was taken away.

“It was really awful for us seeing all these sports teams still being sponsored and we’re showing up to the same events and we’re not,” she said.

Curtis, who has been directing the athletic bands since 2011, said if the funding continues he hopes the band can increase again to where it once was. He said a school Lindenwood’s size should have between 120 and 140 members.

Curtis was the first one to approach Enrollment Management to find out if grants were available for his students, but in the end he said he didn’t have the pull to make the change, athletics did.

“The truth is the athletic bands exist for athletics, not the fine arts programs, so it’s all extra stuff they do,” he said.

Knost said when the student section is full at football games and the cheerleaders are chanting along to the band it creates extra buzz in the crowd.

“I wanted to let you know the school I was at previously didn’t have a marching band,” he said.

It’s such a shock to see audience involvement and audience excitement, encouraging everyone to get into the game,” he said.

It was the first time a coach has approached the marching band in Knost’s four years at Lindenwood.

The band will be at every home football game this year and will make appearances at basketball, rugby, hockey and lacrosse games.