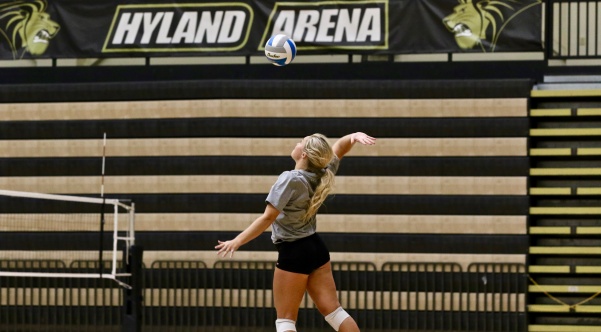 File photo: Senior Allyson Clancy spikes a ball during practice in the Hyland Arena. Clancy had a double-double with 45 assists, 13 digs and two aces against Missouri Southern on Saturday, Sept. 29.
Photo by Mina San Nicolás Leyva

CORRECTION:  A previous version of this article may have falsely implied that the match Friday was Lindenwood’s first of the MIAA conference.

The Lindenwood women’s volleyball team got their first win of MIAA conference play this season when they defeated Southwest Baptist University in Bolivar, Missouri on Friday.

After trailing the first set 18-25, the Lions powered up to win the next three sets 25-19, 25-21 and 25-14. The Lions had ten aces in a four-set encounter, making it the third match in the history of the program to do so, according to the Lindenwood athletics website.

Pressley, an outside hitter, said that the changes they made over the week during practice were more mental than physical.

“We started the season strong, and at some point, we lost our belief that we are good,” Pressley said. “This week our coaches really pushed us to our limits. Every day we focused on learning a new skill or mastering an old one. The whole attitude was very zeroed in on getting better every single day.”

After Friday’s game, Pressley added that the win helped to boost team morale.

“From here, we can only shoot for ending one streak and starting another – the winning kind!” Pressley said.

The Lions effectively started a streak by winning their second match on Saturday at 1 p.m. against Missouri Southern State University with a score of 3-2. The sets were 25-15, 27-25, 14-25 and 9-15.  Until this week, Lindenwood was on a six-game losing streak.

In Saturday’s match, Kosciuk led the team once again with 15 kills. Senior Allyson Clancy had 45 assists.

The Lions are now 10-7 overall and 2-5 for the MIAA conference. They will come back to the court with two home games on Friday and Saturday against the University of Nebraska at Kearny and Fort Hayes University, respectively.