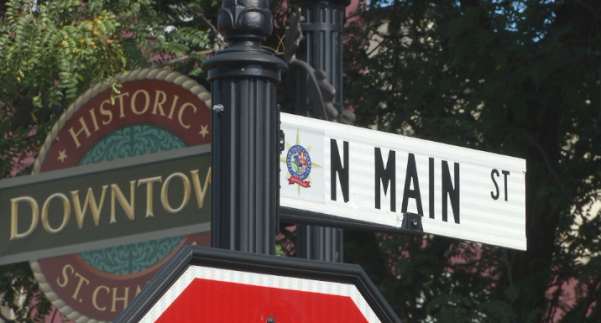 Some restaurants on North Main Street have decried the new liquor law. The regulation will require that the area's 18 bars earn half their revenue from food starting in 2019.
Photo from LUTV

Bill 12622 passed by a 7-3 vote. Councilman Dave Beckering said at the meeting that the city has awarded too many liquor licenses in the three-block area between Jefferson and Clark streets, creating 18 bars.

“What we ended up with was an area that was supposed to be restaurants and has become an entertainment district,” he said.

The new measure was approved after strong opposition to a proposal in May that would have required bars to stop selling alcohol after 11 p.m. or two hours before close.

A point system with 29 different violations. If a bar in St. Charles racks up more than 6.5 points in a six-month period, its liquor license will be revoked. After a six-month period, the points accrued (if any) will go back down to zero.
Violations include:

A liquor commission to review point infractions and consequences. The chief of police, the director of community development and the finance director will comprise the commission.
At least 50 percent of annual sales at bars on N. Main Street must be from food.  Currently, the amount of required food revenue is $200,000 per year.

Below is a map of the bars on N. Main Street affected by the food sales requirement.