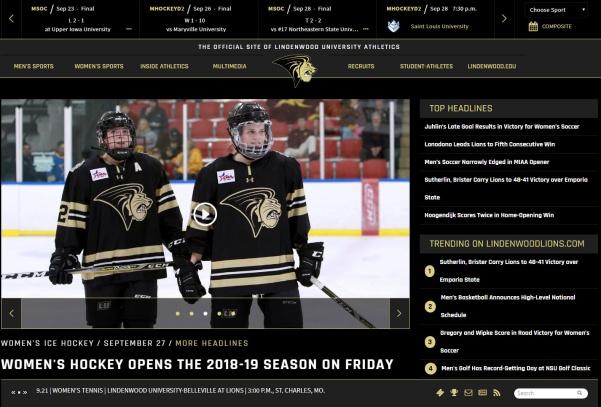 A screenshot of the new athletics website, which features both Student Life Sports and NCAA Sports.

Lindenwood University’s athletic department recently unveiled a new website which is quite different from the old one, and will feature info for both NCAA and Student Life Sports.

Students and faculty recently noticed a change in the website that launched on Sept. 12,  and it has sparked conversation.

“We send them what we want it to look like[…]They design it, and it’s like a six month process,” Assistant Athletic Director Michael Morgan said.

The two sides go back and forth bouncing ideas off of one another, until the “perfect” website has been created.

The new site allows Student Life Sports and NCAA sports to be in one place, rather than being on two different sites, as they were previously.

Morgan said that they are still working on some bugs with the website. They are transferring almost seven years worth of data from SLS, which is causing more work, he said.

The new website has been designed to be geared more towards the multimedia content, including videos, photos, and social media.

With multimedia being the main focus of the new site, feature stories are front and center when the site is opened up. According to Morgan, the stories are displayed in order of relevance.

“Obviously on a Saturday, football is probably going to be at the number one spot, and then we will work our way down through the list,” Morgan said.

He says that all of the sports are going to be getting the same amount of coverage that the old site allowed.

“I like that the new website contains both Student Life Sorts and NCAA; it seems more organized,” member of the women’s bowling team Kayla Shimmer said.