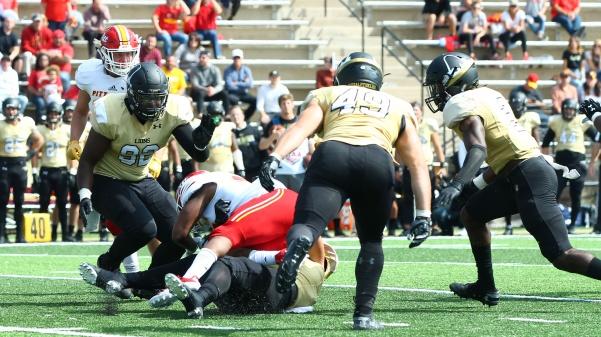 Although their 27-24 loss was deflating, the Lions’ battle against the seventh-best team in the nation certainly doesn’t reflect their current ninth-place position in the MIAA.

The scoring began on Pitt’s second drive. After what seemed like their second straight three-and-out, the Gorillas succeeded on a fake punt; punter Carter Anchors rushed for 30 yards to put the team into Lindenwood territory. After six consecutive rushes between quarterback B.J. Bradbury and running back Tyler Adkins, the Gorillas managed to put three on the board to take a 3-0 lead midway through the first quarter.

Towards the end of the first, the next score came by way of the Lindenwood defense. On a Pitt third down in the Lindenwood redzone, an overthrown pass intended for Adkins was tipped and intercepted by linebacker Drew Seers. Seers proceeded to return the pick 82 yards to put the Lions up 7-3.

After Lions defensive back Jordan Perry intercepted the next Pittsburg possession in Lions territory, the Gorillas quickly rebounded. Their following drive resulted in a Bradbury four-yard touchdown plunge to take a 10-7 lead; running back Tucker Horak and Bradbury combined for 44 rushing yards that drive alone.

The next two possessions for both teams would result in punts.  A Pittsburg punt pinned the Lions deep onto their own 13-yard line with two minutes remaining. In what seemed like it would be a two-minute drill consisting of passes downfield, Lindenwood looked towards running back Nash Sutherlin to carry the ball. One play into the drive, Sutherlin took a simple dive play 87 yards to the house to take a four-point lead.

The minute and a half left in the second quarter was too much time for the Pitt offense however. Bradbury quickly moved the ball all over the Lions defense. After completions to wide receivers Lorenzo West and Brenner Clemons, Bradbury next went back to West who toe-tapped and caught a 39-yard touchdown pass to take the 17-14 lead into halftime.

After seven consecutive punts in the third quarter, the next score finally came at the midway point in the fourth. A failed fourth down conversion for the Gorillas on midfield put Lindenwood in beautiful field possession. Quarterback Cade Brister completed passes to three different receivers, including that of Paul Silvio, who caught a five-yard touchdown in the back of the endzone to put the Lions up 21-17.

Next Pittsburg drive, the Gorillas looked to true freshman Matt Harman to replace the injured Bradbury. However, the Lindenwood defense stepped up once again, and took advantage of the inexperienced quarterback. On second down, a Darrius Williams hit on Harman forced a fumble that would be recovered by the Lions on the Gorillas’ 37-yard line. Kicker Barrett Foley capped off the drive converting a 38-yard field goal with five minutes remaining in the game.

After the Harman fumble, Pitt decided to make another quarterback change. The Gorillas put in their original starting quarterback, John Roderique, who planned on sitting out the game while nursing an injury. Roderique immediately made an impact for the Pittsburg offense. After leading three straight third down conversions, the quarterback caught a two-yard touchdown on Pitt’s version of the notorious, “Philly Special” that the Eagles used in Super Bowl 52. This score tied the game at 24 with two minutes remaining.

The Lions couldn’t manage to score on their final possession of regulation, so the contest moved into overtime.

Pittsburg won the toss, and decided to play defense first. After a minimal rush by Brister, two incompletions, and a delay of game penalty, the Lions set up to kick a 46-yard field goal. Foley’s kick fell short, and the Gorillas took the ball, only needing to convert a field-goal to complete the win.

The Pitt rushing-attack between Adkins and Horak carried the offense in overtime. The two combined for 20 yards of rushing, which put the ball on the 5-yard line for the Gorilla field goal unit. Kicker Jared Vincent converted the 22-yard field goal to capture the win.

It’s an early one next Saturday, as the Lions travel to Ron & Carol Cope Stadium for their 11 a.m. matchup against the University of Nebraska-Kearney (3-2).