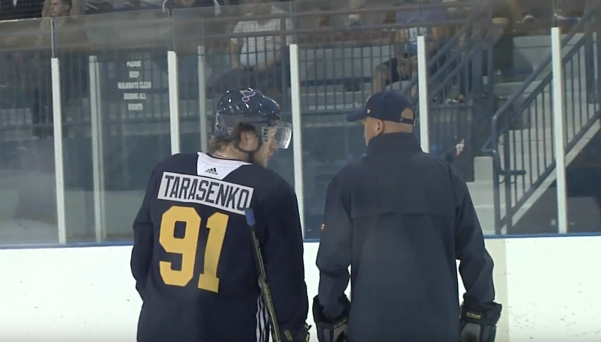 Vladimir Tarasenko speaks with a coach during the first practice at the IceZone in Hazelwood on Sept. 14.
Photo by Neil Fischer

Blues fans got their first glimpse of the St. Louis hockey team’s lineup for the 2018 season on Sept. 14.

The Blues were practicing at their current rink at the IceZone in Hazelwood.

Patrick Maroon, Vladimir Tarasenko and Ryan O’Reilly, three men from three different countries, are joining forces as a line to propel the team to the Stanley Cup this year.

The Blues are the oldest NHL team to never have won a Stanley Cup.

LUTV reporter Neil Fischer went to the rink to see the team in action.