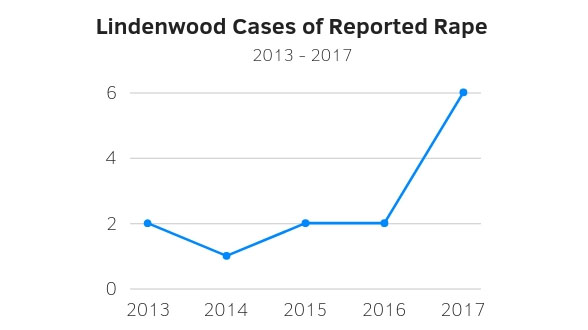 The number of rapes reported on campus tripled last year according to the 2018 Clery report, published by Lindenwood University last Friday.

The Clery report is required to be published annually to stay in compliance with the Clery Act. According to the Clery Center, the Clery Act is a consumer protection law that aims to provide transparency around campus crime policy and statistics.

Director of Public Safety John Bowman said that he does not believe this means that Lindenwood’s campus is any more dangerous.

“I don’t think more sexual assaults are taking place, but I do believe students are more knowledgeable about how to report assaults, thus the increase of the number of reported assaults,” he said. “The #Me Too movement has empowered victims to seek help and make the report.”

The #MeToo movement began around October 2017 when #MeToo went viral on several social media platforms after the sexual misconduct allegations against Harvey Weinstein, according to an article published by Forbes Dec. 2017.

Paula Stewart, the coordinator of Clery compliance, said she agrees with Bowman that an increase in the number of reported assaults isn’t necessarily a bad thing.

“Sexual assault is the most underreported crime that occurs, and thus happens more than we know,” Stewart said. “When the numbers go up, that means more assaults are being reported, and those survivors are getting the support and resources they need.”

According to Bowman, Public Safety has been working more on educating students on how to report these assaults as well as provide them with Title IX information.

“Two years ago, the university hired a full-time Title IX coordinator whose sole job is educating students/staff, taking reports and walking [victims] through the process,” Stewart said. “We are also building relationships, so students feel comfortable about reporting and what options they have when they choose to report.”

Another crime that spiked in the number of cases reported was drug law arrests, which increased to 24 cases reported in 2017 from four the previous year.

Stewart said that the increase can be attributed to several different things.

“The main [reason for the increase is] that the area coordinators routinely performed health and wellness checks in the residence halls and in the individual housing units,” she said.  “This resulted in more reports being generated, and thus more arrests being made. There was also better communication between area coordinators, Public Safety and St. Charles Police.”

According to Stewart, the number of cases does not necessarily mean all of those arrests were of Lindenwood students.

“If someone was on our campus visiting, for example, and there was an incident and police were called and an arrest was made or summons was issued, it is counted in our statistics,” she said.

For more information on crime statistics, other security procedures and policies, or to view past reports, visit Lindenwood’s Campus Security page.