Visitation and co-ed dorms: Past, present and future 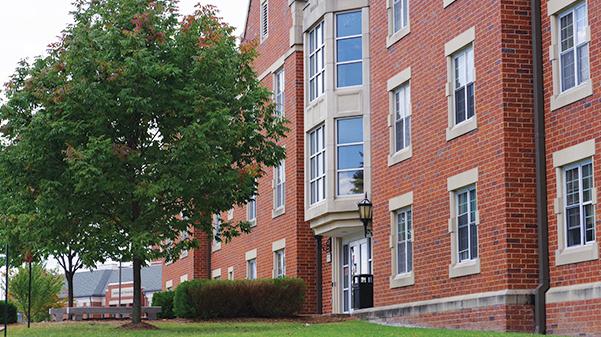 Lindenwood’s two new co-ed dorms this semester and the expansion of visitation privileges are changes welcomed by many students, but what has been the effect of these changes?  Why were they made? And what might the future hold?

After the smooth rollout of 24-hour weekend visitation in dorms and 24/7 visitation in off-campus housing last fall, Lindenwood decided to make Calvert Rogers and Rauch Memorial Halls co-ed dorms this semester.  Now, the new option has attracted over 350 residents.  Associate Director of Residential Life Jesús López said that both halls are above 90% full.

Terry Russell, residential life director, said Lindenwood housed men and women in the same hall last summer, and student support for co-ed housing lead him to propose it for this semester. Originally, the plans were for one co-ed hall, but Russell suggested there be a second one to make up for off-campus housing Lindenwood lost in the First Capitol area due to the need for infrastructure improvements.

This semester, Lindenwood sought feedback from Rauch and Calvert Rogers residents about 24/7 visitation, and the dorms gained the much-anticipated privilege on Oct. 1.

Shane Williamson, dean of students, said they considered the change based on the success of other recent visitation changes.

Also on Oct. 1, a meeting was held about potential 24/7 visitation in the Linden Lodge, and on Monday, the change took effect after residents answered a survey.

Before this, visitation was only allowed noon to midnight weekdays and 24 hours on the weekends, but in the co-ed halls, there were some problems with differentiating residents from visitors

“If someone comes in the building, I have to think back if I’ve seen them in before,” Rauch CA Adrienne McDowell said.  “We’ve been over that we still have visitation, but they seem to forget still because it is so mixed.”

In the Lodge, a former Days Inn under a mile from campus, most residents do not have a roommate.  But the co-ed dorms consist of two-bedroom suites shared between four students, creating the opportunity for residents’ new freedom to create problems for their roommates.

But Russell and Williamson emphasized that even with expanded visitation, residents can still set boundaries within their individual rooms with roommate agreements.

“We still give the option up to the individual students; even though the overwhelming majority want it 24/7, there were some that probably still want to keep it where it was,” Russell said.
What do residents think?
Laura Castro Millan, who started living in Rauch when it was women-only, was originally worried about the change, but the only problem she has noticed with men living there is that they leave their laundry in the machines.

“Last semester when I lived there, girls were not like the guys, as well as if I needed the washer, and there was a dryer empty, I would take it and put it there, but with guys, I don’t feel comfortable doing that,” said Castro, who is from the Republic of Colombia.

Sophomore Delaney Dockery said living in a co-ed hall is not too different from in women’s dorms.

“I was kind of worried that things like laundry facilities were going to be grosser or that the dorm itself was going to be smelly and less maintained, but I haven’t noticed that at all,” she said.

Dockery moved to Calvert to live with her sorority sisters on the first floor, but a reason many residents flock to co-ed halls is to interact with friends of both sexes more easily.

Noah Douge, a North Carolinian who lived in a freshman dorm last year, said “less stupid stuff” goes on in Calvert.  He and other male Calvert residents said they are less free to walk around partially clothed, but it still happens sometimes.

In September, Residential Life surveyed co-ed residents on what they think the visitation policy should be. Russell said about 70 percent of residents in both dorms answered the survey, and an “overwhelming majority” voted for 24/7 visitation.

Advertising major Mia Tebbe currently lives in housing, but she said the visitation restrictions on campus treat students like children and encourage them to break the rules to avoid the time restraints they impose.

“People are sneaky,” said Tebbe, who is from Kansas City.  “Rauch and all those dorms have those side doors.  Everybody lets people in through those.”
A popular trend
Former professor Glen Cerny said co-ed dorms would not have even been on the table when he attended Lindenwood shortly after the college started officially admitting men 50 years ago.

“Doesn’t mean they weren’t co-ed most of the time anyway, but at that point that was unheard of on college campuses,” he said.

In the 1960s, residents faced restrictive rules at Lindenwood.  Men could not get permission to stay in a women’s dorm unless there was a separate bed, and students had to be inside after the dorms closed at night.   During that time, Lindenwood also faced financial problems that forced it to admit men, and after that, the culture changed.

Penny Bryant, now Lindenwood’s student and academic support services director, was a resident adviser in Parker Hall in the early 1980s, when it housed men on the first floor and women on the top two floors.  She said that under the presidency of Dr. Robert Johns, there were no visitation rules, but she is unsure if any other halls were co-ed.

“We never had any issues living in the co-ed dorm, I mean it’s not like everybody was running around without their clothes on or anything like that,” Bryant said. “It was very respectful.  The boys were noisy, but other than that, Parker Hall was great.”

The rules became more strict after Dennis Spellmann became president in 1990, but now that Lindenwood has grown from the smaller campus it was back then, times are changing, Bryant said.

“You go away to school, not only to get an education, but for a learning experience in a lot of different ways, so I think this is a step in the right direction,” she said.

Today, one reason Lindenwood students support co-ed dorms is their popularity at other schools.

“Co-ed’s more of that traditional college feel, because every other school or university has one for the most part, ” McDowell said.

Local universities including Webster, Mizzou, and Maryville, all have co-ed residences.  At UMSL, all halls are co-ed, and men and women live on the same floors, the university’s assistant director of housing operations said.

Many schools, including UMSL, Stanford and UC Berkeley, have even more liberal arrangements, which allow students to have a roommate of either sex.  But even at schools with “gender-neutral housing,” more than 95 percent of residents choose to live with someone of the same gender, according to the National Student Genderblind Campaign.

Hansen and Tebbe said having an opposite-gender suitemate sounds fun, but others disagree.

“I could see us living on the same floor but not in the same suite,” said Douge, an elementary education major. “I think there could be issues that could come with that very quick.”

With the increasing popularity of mixed-gender housing, the question remains as to whether Lindenwood will see more co-ed halls.  Education and English major Katie Gierer likes the idea of more versatile options, but she personally prefers to live in single-gender Blanton Hall.

“Even when I wasn’t a CA, I was just glad that it was all girls, because it just seemed calm, and there was […]less conflict, just everybody kind of got to do their own thing,” she said.

From Russell’s perspective, co-ed halls allow Lindenwood to make more efficient and flexible housing assignments.  If men and women can live in the same building, surplus residents can live in co-ed housing if there is not enough room in a hall specified for their gender, he said.

“I think people will stay here because they have the same opportunities that they would have at other schools,” he said. “I don’t know that an incoming freshman is really thinking that far ahead, and of course they don’t have the co-ed hall opportunities as a freshman, but I think in terms of retention, for upper-class students staying on campus, I think it will definitely be an advantage.”

Russell said Lindenwood will always maintain some single-gender dorms, but other halls could follow the path of Rauch and Calvert.

“If this pilot goes well, then it’s definitely something we could look at in the future,” he said.