Lindenwood Then and Now: the secrets of Butler Library 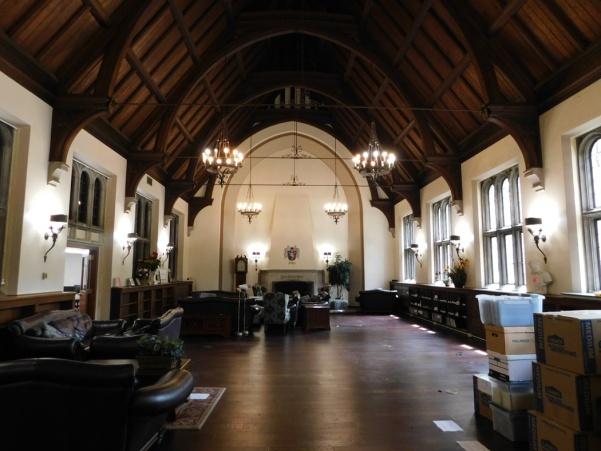 The interior of Butler Library in August 2017 after it was indefinitely closed. The building was opened in 1929 and was designed by prominent St. Louis architect Louis LaBeaume.

The currently closed Butler Library on the old side of campus is known for its iconic “Harry Potter” aesthetic, but there are many features hidden in the architecture and history of the almost 90-year-old building.

That history started with the Butlers.

James Gay Butler was born in Michigan in 1840. When the Civil War broke out, he volunteered for the Union Army in 1861, according to “Reminiscences of Lindenwood College,” a book compiled in 1920 by the college’s dean.  After the war, he married Margaret Leggat (who the library would be named for) and started a successful tobacco company in St. Louis.

Colonel Butler was elected to Lindenwood College’s board of directors in 1910.  The Butlers were avid supporters of the Presbyterian Church and contributed generously to Lindenwood, (which was connected with the church). They donated $10,000 to the construction of Ayres Hall, which with inflation equates to about $258,000 today.

In 1915, Butler Hall, a dorm until the 1970s, was named after Colonel Butler. He died the next year, but the Butlers’ money continued to benefit Lindenwood even after their deaths.

According to “Reminiscences,” shortly before Colonel Butler died, he said to his wife, “What I have left undone for Lindenwood you will do.  You know my wishes.” Although Margaret Butler was disabled in her later years, she remained “keen of mind” and outlived the colonel by two years.  Together, they left almost $4 million to Lindenwood, equivalent to around $70 million today.

This money financed the construction of Butler Library and other buildings, but it also allowed the college to become a four-year institution calling itself the “Wellesley of the West” after a prominent Massachusetts women’s college.

Other than the library, LaBeaume also designed buildings for the St. Louis World’s Fair and built Kiel Auditorium and what is now the Stifel Theatre.

While it was still under construction in the summer of 1929, the library’s cornerstone was laid.  The St. Charles Banner News reported that it contained a $2 bill from 1929, a $1 bill from 1923, a silver dollar from 1892, local newspapers from the time and mementos from students, faculty, alumnae and administrators.

“No college is greater than its library,” said Lindenwood’s president, the Rev. John Roemer, at the ceremony, according to the Banner News. “Books are the tools for the mind, and the library is the workshop. The library is the binding link of the ages. Here we have the storehouses into which facts and principles have been harvested.”

The time capsule was scheduled to be unsealed in 2004, but Huffman said it was not opened until 2008.

But besides this, there is more to the Tudor Gothic library than meets the eye. Huffman said a bell is in the building’s tower and once rung on the hour or to call students to mandatory weekly evening prayer service prior to the 1960s.  At some point the bell was connected to electricity, and the connection later broke.

Huffman said the only way to access the bell is by climbing 20-25 feet up metal rungs embedded into the tower wall.

Click to hear a recording of the Butler Library bell ringing in 2010. Audio from the Mary E. Ambler Archives.

The wind vane on top of the bell tower depicts an owl and a parrot, along with a pile of books.  The owl symbolizes inductive reasoning, and the parrot represents deductive reasoning.

In 1976, a lounge in the library’s basement was named after this owl.  Called the Night Owl Nook, it was open for students to study in the evenings after normal library hours, according to the Lindenwood Ibis, then the student newspaper.

Another detail of the library with symbolic meaning is the Sibley coat of arms above the fireplace.  Below the crest lie the words “Litera Scripta Manet,” part of a Latin phrase meaning “The heard voice perishes, but the written word remains.”

The Sibley crest has been a common symbol of Lindenwood, but it probably was created decades after the founders’ deaths to make the college seem more high status.

In a 1989 honors day convocation speech, evening and graduate admissions director Marsha Hollander Parker said, “It would be pleasant to speculate that the Sibleys carried their family’s coat-of-arms with them when they came to this area, and had been guided to some extent by its meaning and significance as a symbol of noble entitlement bestowed by some grateful sovereign in the dark medieval past.  It appears likely however, that the Sibleys never used or even knew their own family crest[…]No mention or image of it appears in our records before well into this century.”

According to Parker, the symbolism of the crest is as follows: “Blue signifies loyalty and truth.  Red denotes military fortitude and magnanimity.  Silver signifies peace and sincerity.  The griffin symbolizes vigilance and eagerness in pursuit.  The crescent[…]signifies one who has been enlightened and honored by — his sovereign.”

Butler Library was closed in 2017 when the Library and Academic Resource Center was opened.  It currently is used for storage, and its future remains up in the air.  Vice president of operations Diane Moore said in an email that Lindenwood is potentially considering a new science, technology, engineering, and math facility on campus, but “it is too early to know if Butler Library would even be considered” as its location.

Since Lindenwood’s foundation as one of the oldest girls’ colleges west of the Mississippi, the school has had a rich and unique past.  This is the fifth article of Lindenwood Then and Now, a series about the history of Lindenwood. Last week’s installment, “4 stories from school sports history,” showcased the history of the Lions name and colors, the golf course which once existed on campus, and more. Check back Oct. 23 for more.