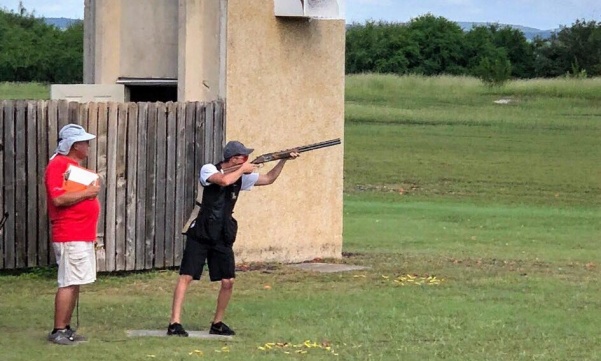 Brandon Stone competes in the .28 gauge event during the NSSA Worlds in San Antonio.
Photo courtesy of Terra Stone.

Brandon Stone finished on top of the Lindenwood squad at the National Skeet Shooting Association world championships Friday after a week of competition in San Antonio, Texas.

The tournament started on Monday and consisted of different events each day, starting with .12 gauge, and ending with the toughest event, .410 bare gauge.

Stone, a sophomore from Texas majoring in business, finished third in his class and got the most noteworthy performance for the Lions in the .28 gauge event on Thursday. Stone scored 99/100 and tied 11 other players, which led to a shoot off where Stone came on top.

“I always tell myself process, not outcome when I shoot,” Stone said.

“It was an amazing feeling coming off only missing 10 targets this whole week,” Stone said. “Once you get in the ‘zone’ you feel like you are unstoppable.”

The NSSA Worlds tournament runs from Sept. 28th through Oct. 5th every year and gathers some of the best players from the world and the United States.

The shotgun team is travelling next Friday to Grand Island, Nebraska, to compete at Heartland Shooting Complex against Hastings College.