Lindenwood student forms band after being involved in marching band 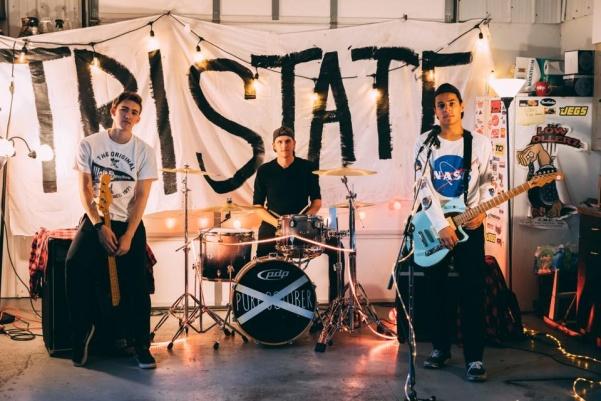 A cover photo of the band displaying their new name
Photo retrieved from the TRISTATE Facebook page.

He was just 10 years old when he and his buddies wanted to start a band, and the plan was for him to play guitar.

But every time the group of friends went to Guitar Center, Lindenwood student Tom Gederman found himself gravitating towards the drums, not the guitars. This is when he decided that he was going to be a drummer.

What really drove Gederman into choosing drums was the song “Supermassive Black Hole” by Muse.

“After hearing this song, I thought ‘This would be really cool to learn how to drum to,” Gederman said.

As soon as he purchased his drum set, this was the first song he learned to play.

What really propelled him into his drumming career was when he was a member of the O’Fallon Township High School Marching Band.

When Gederman joined his first band back in 2015, he said it had been through a bit of a “rollercoaster.” The band’s original name was Pure October and lost members over time. Eventually, only three remained: Gederman, singer Alex Edith and guitarist Spencer Peck.

They then decided that the name Pure October no longer suited them. They came up with a new name: TRISTATE.

TRISTATE fit because all three members live in different areas and attend different schools. They also enjoy the television show Phineas and Ferb. This is where the name for their fan base came from, The TRISTATE Area.

Along with the name, the band decided to change their direction of music, describing their style as alternative rock and pop-punk.

Gederman originally came to Lindenwood to pursue a career in sports management but recently decided to make a switch to music business.

He decided to make the switch after an interview in the sports management field. He said he could not see himself “doing this” for the rest of his life.

“If I’m going to put myself in a box, I want to make sure it is the right box,” Gederman said.

His main goal for his degree is to make it as a performer. If that were to not work out, he would like to go to Nashville to work as a studio or touring drummer.

At Lindenwood, his drumming style is rather different than what he plays with TRISTATE. The department at Lindenwood focuses heavily on jazz rather than contemporary.

Gederman is a member of the marching band and various other ensembles. He is even going to be participating as a member of the pit orchestra for the coming school production of “Mary Poppins.”

Dr. Jeffrey Barudin has been one of Gederman’s professors since he came to Lindenwood three years ago.

“He’s at his happiest when he’s playing something similar to the drum set,” Barudin said. “That’s where he’s the most in his element.

From being so involved in different ensembles, many people have gotten the opportunity to know him and work with him. One of them being fellow drumline member, Andrew Combs.

“He’s a good drum set player and is dedicated to the music,” Combs said. “He’s great at keeping time.”

Gederman said that seeing people enjoy his band’s music is one of the best feelings.

“We try to respond to every comment,” Gederman said when talking about Facebook coverage. “We try and make it a really personal thing.”

The band has a new song and video coming out in November as well as an EP coming out in January or February. The band will also be performing with an unannounced band on Dec. 15 at Pop’s Nightclub and Concert Venue in Sauget, Illinois.