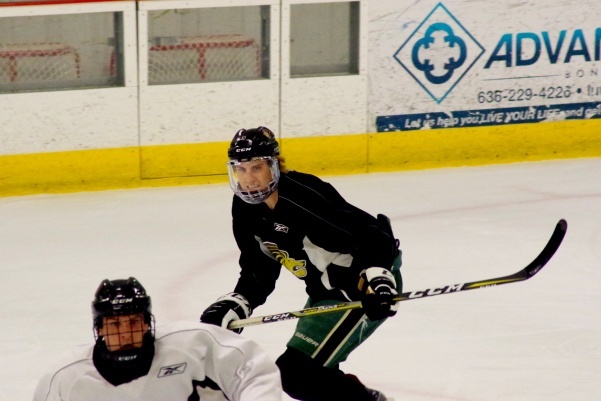 Explosive. Dominant. Overpowering. All three of these words can be used to describe the Lindenwood Lions’ two-game sweep over the Robert Morris Eagles over the weekend.

Despite being on the road, the Lions completely outclassed the Eagles, winning both games by a combined score of 15-1.

“It was a great weekend for our team to figure out how to play and win on the road,” Hayden Ursulak said. “Our special teams really took over from the unreal power-play to the solid penalty kill.”

The demolition began on Friday night, Lindenwood’s first away game of the season. The Lions were all over the Eagles ever since the opening drop of the puck, getting out to an early 1-0 lead after a Matt Runyon goal. It was Runyon’s second goal of the season, and it gave the visitors all the momentum they needed heading into the second period.

Three minutes in, the Lions doubled their advantage courtesy of Jake Townsend. Townsend received the pass from Cade Owad, and blasted it home making it a two-score game. Things didn’t get any better for the Eagles towards the end of the period, as Brendan Murphy knocked home Lindenwood’s third of the night with 2:12 left on the clock.

Zach Martin would score quickly into the third period to make it 4-0, and the teams would trade a pair of goals after that to see the game conclude at a 5-1 scoreline in favor of the Lions. Goaltender Cooper Seedott continued his strong start to the season, making 22 saves on 23 shots faced. The sizable win left the Lions feeling confident heading into the second game of the series on Saturday.

“We all are on the same page, which is why we’re winning every game,” Zach Mitchell said. “We have a mindset that we are going to win every game and we try to prove it every day. We have a great group of guys, and we are the only ones that can halt our performance.”

While Friday’s contest was at least somewhat close, Saturday’s game proved that the Lions are simply on an entirely different level than the Eagles. In the first period alone, Lindenwood scored a ridiculous seven goals. Seven. In 20 minutes of play. Mitchell, Lindenwood’s star forward who scored three goals in the team’s first two games against Central Oklahoma, netted a hat-trick of power-play goals in the first 20 minutes to help lead the Lions to a rather comfortable 7-0 lead.

“I’ve been sticking to my game, and playing my game,” Mitchell said. “The guys around me have played well and have helped me do this so far.”

The Lions would add three more to their total by the end of the night, trouncing the Eagles by a final score of 10-0. Seedott collected his second shutout of the season, making 24 saves in the victory. Lindenwood was already feeling confident after sweeping Central Oklahoma in their first series of the season, and this dominant display only helped build that confidence for this team.

“We are feeling way better [since last week] after a trip on the road together,” Ursulak said. “The bus and the hotel really brings everyone together and I think the team chemistry is starting to come.”

Now at 4-0 on the season, Lindenwood has outscored its opponents 22-3 through four games. In each game they’ve played, the Lions have been proving why they are one of the elite teams in the conference. Lindenwood will return home on Friday, where the Lions will host Iowa State for another two-game series next weekend.