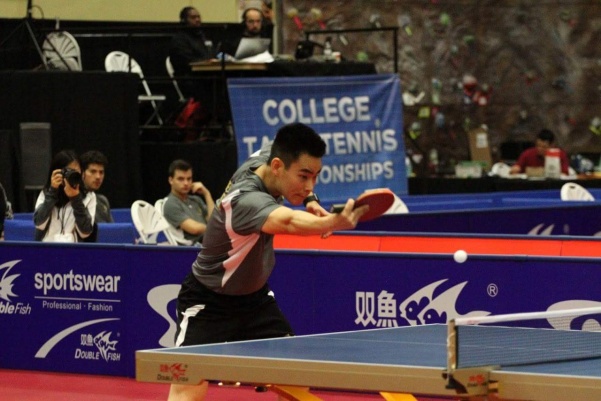 Before coming to Lindenwood from his homeland of Brazil, now 25-year-old Jeff Yamada had already won many table tennis awards.

At 13, Yamada won a national championship in Guarulhos in the state of São Paulo in 2006. He was also a part of the national team under 13 and under 18, and he represented Brazil in the senior tournaments and played in the senior South America Championship in 2012 and 2014.

He heard about Lindenwood through friends who attended with table tennis scholarships.  For that reason, Yamada came to Lindenwood to pursue his dream of being a professional table tennis player while earning an international business degree.

“I have always wanted to play and represent my university,” Yamada said. “Also, I want to make my father proud.”

Yamada said he was disappointed after learning that Lindenwood will no longer fund the table tennis team this semester.

“One of the biggest reasons I came to Lindenwood was because I want to play table tennis to represent the university, my country, and my father,” Yamada said.

However, he said he has not given up on his goal of playing for Brazil in the Olympics after graduating.

Table tennis is not as well-known as other sports, he said, but it still takes dedication and practice to play at the highest level.

“This path is difficult and rough because in order to become professional players, no matter what sport, you still need to practice and push yourself hard,” Yamada said.

Yamada said that at Lindenwood, he could only practice three times a week, two hours for each session – not enough if he is looking to play in the nationals. Professional table tennis players usually practice for at least six hours a day.

Nevertheless, the team gave their best to represent Lindenwood at tournaments, even though they did not have enough practice.

“Even though we might not be the best players or the best sports in Lindenwood,” Yamada said, “but our motivation and spirit as a team is definitely not less than any other.”

“He sweats so much and most people don’t think table tennis players sweat, but they do when they are dead serious,” she said.

Yamada said table tennis has changed his life.  Through his experience with the team, he developed a bond with the other players that made them like brothers and sisters.

The sport brought him to over 15 countries, and he met long-term friends from around the world including one of his best friends, Massao Kohatsu, a fellow native of Brazil.