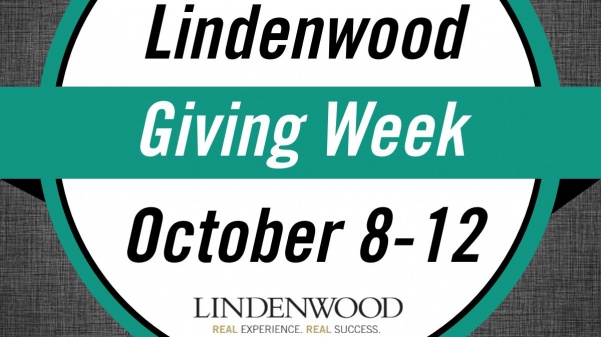 Giving Week is a week to donate to different Lindenwood groups and schools. Every group can receive funds from this event.
Logo provided by Kassandra Linzmeier.

Lindenwood University has set its goal to $50,000 for its first Giving Week to help raise funds for different schools, sports and clubs on campus.

Giving Week is a week-long fundraising event for Lindenwood, from Oct. 8-12.

“Faculty, staff, parents or friends can make their mark by supporting current and future students of Lindenwood,” Kassandra Linzmeier, associate development officer for University Relations, said. “We get improved alumni engagement; it’s a way to reconnect with the alumni.”

In previous years, the school has taken part in Giving Tuesday and Give STL Day, both of which are days set aside for fundraising for organizations and nonprofits. Giving Week is different because it only focuses on Lindenwood.

“This is the first time we have done a stand alone for Lindenwood because it is becoming more common in universities,” Linzmeier said.  “Since it’s our first one, we want to do a week of giving as apposed to a day because it gives donors a little bit more time [to donate].”

The idea started when several universities reached out to Lindenwood, asking if it had done a giving week before, according to Linzmeier.

Giving Week is being hosted through a peer-to-peer platform, meaning the money is raised by students, faculty, staff and alumni sharing the event on social media.

“By doing this we are getting brand new donors that we would have never gotten before and we see amazing numbers off of that,” Linzmeier said. “Our main goal as a university is to ‘friendraise’ which means we are reconnecting with our alumni.”

Every school is represented on the donation page, however, due to the amount of sports teams on campus, the sports teams are being placed on the page in phases, according to Linzmeier.

Although not every club, sport or organization is listed on the page, donors are encouraged to call Linzmeier if they wish to donate to a group not listed.

“We want everyone involved in this,” she said.

As of the time of this article’s publication, Giving Week has raised $16,786.63 from 124 donors with four days left to donate.

To become a donor, go to Lindenwood’s iDonate page. To donate to a group not listed or to donate after Giving Week, call Linzmeier at 636-949-4424.