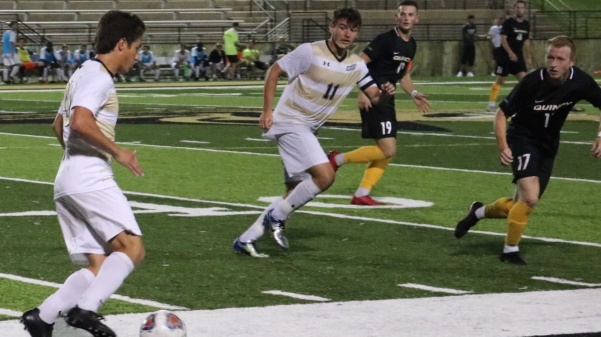 The Lions secured their 3-2 win over Quincy, despite two late goals from the Hawks.

The Lions went to work early in the game and quickly jumped to a 3-0 lead. The first goal was scored in the 11th minute by junior Gaspar Alvarez that came off a cross by junior Thomas Hutcheson. The assist from Hutcheson marks the fifth game in a row he has registered a point, and he did not stop there.

Hutcheson scored the next two goals for Lindenwood to give them a 3-0 lead. The first came by the way of an unassisted blast from 25 yards out. For the second goal, Hutcheson chipped the ball over the goalie at the front of the box, and with the defender on his back, he scored. As he was scoring the goal, his momentum and the defender on his back carried him into the goal post with enough force to move the entire net.

“I thought it was going to go in, but the defender was going to head it out so I had to make an effort for it… And I knew he was going to shove me into the post,” Hutcheson said.

He was subbed out of the game shortly after the goal to make sure he did not hurt himself severely. Hutcheson said he was going to get stitches in his chin after the game was over.

The second half was stagnant to start, with multiple stoppages because of injury. It was not until late in the half when Quincy started to come alive.

Freshman Kingsford Adjei scored the Hawks’ first goal off a rebound in the 82nd minute of the game. Adjei drew a penalty kick in the 86th minute that he converted, and cut the Lions’ lead to 3-2.

The Lions were able to outlast the late effort from the Hawks, and secured the 3-2 victory.

“We were looking to get a shutout today; we haven’t had one all season,” Hutcheson said. “We had a 3-0 first half, unfortunately we let up a few goals, but good team effort to keep that lead.”

Lions’ senior Aleksa Nenadic started in the net and played all 90 minutes, making four saves. For the Hawks, junior Adam Whybrow started in net and made three saves.

Quincy outshot the Lions 13-2 in the second half and 17-7 for the entire game.

The win brings the Lions record to 6-4-2 overall.

Next, the Lions travel to Delta State University to take on the Statesmen Oct. 12, at 3 p.m.