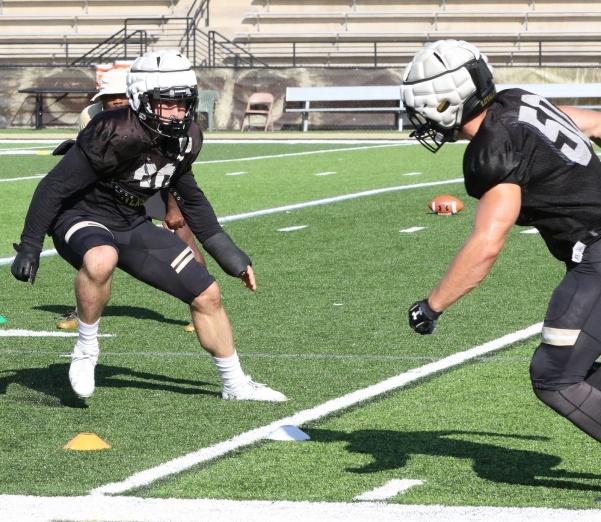 He moved to St. Louis in the summer and continued taking classes on campus this fall and had no intention of playing football for the Lions. It was not until the fall semester that Turnure started to wonder if he had any athletic eligibility left, which would enable him to play football.

“I reached out to Coach [Jed] Stugart and I basically just told him who I was, my situation and said ‘I’m just curious if I have eligibility left’,” Turnure said.

Turnure wasn’t sure how his Division I athletic eligibility would transfer to a Division II school like Lindenwood. He had already played three years of football and one year of lacrosse at Ohio State. However, NCAA Division II eligibility is calculated by the semester and not the year.

“They calculated my eligibility out, and I was right at nine,” he said. “So I had literally one semester remaining.”

Turnure was able to join the team and add depth to the Lions’ core of linebackers, and has been with the team since their week two matchup against Missouri Southern State University.

“I don’t think I’ve ever had that happen,”  Stugart said when asked about a player joining the team mid-season. “We’ve got some young linebackers that are still developing[…]The impact was big because we were able to put a guy [in] that’s had some experience playing at the level he did.”

The “level” Stugart is referring to is Turnure’s experience as a special teams player at Ohio State. Turnure walked on to the football team his sophomore year and was primarily a special teams player.  This was also the same season that the Buckeyes won the national championship against Oregon.

“It was insane,” Turnure said about the national championship run. “It kind of just added fuel to the fire of what I wanted to accomplish there[…] The experience alone was indescribable.”

While at Ohio State, Turnure was associated with some big personalities. The year they won the national championship is the same year that Dallas Cowboys current running back Ezekiel Elliott started to make some real noise as an NFL prospect, and was a huge part of Ohio State’s success that season.

Both Turnure and Elliott are St. Louis natives and were acquainted from playing against each other in high school. Turnure said when he was considering walking onto the team, Elliott was in full support of the idea.

Another one of the Ohio State personalities was head coach Urban Meyer.  Turnure told the story of how Meyer gave him his nickname. They were in a special teams meeting watching tape when Turnure did something that stood out, and Meyer took notice.

“He had me stand up in the meeting,” Turnure said. “He was like ‘You’re kind of big, I’m going to call you meat.’ Literally since that day, even in serious situations, he would call me meat.”

He was very vocal about his great relationship with Meyer.

The relationships Turnure has had throughout his football career is what has him working toward his career as an agent. He said he wants to stay around football, and helping college athletes transition into the NFL is something he is passionate about.

“As these guys transition into the NFL[…] they need help, they need protection, they need someone there with them that actually cares,” Turnure said. “I really want to help these guys[…] because I genuinely do care about them.”

Turnure said he enjoyed the Lindenwood football program and everything around it. He praised everything from the coaches, the players and the facilities alike.

“That comfortable home feeling that I got at Ohio State being on the team and around those great coaches, I got that same feeling with these guys,” he said. “The players are awesome guys, and the coaches are awesome people[…]I’ve really enjoyed it so far and I’m looking forward to more.”