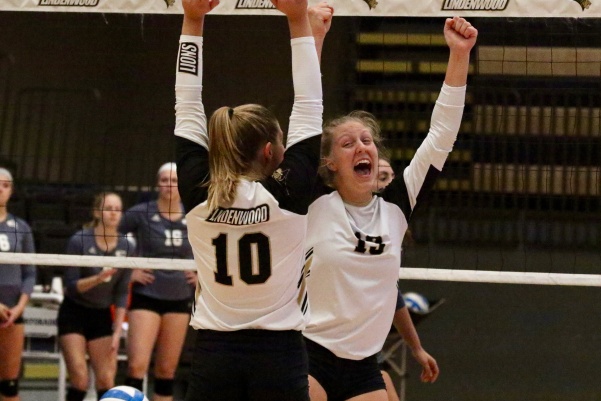 Jenna Garrett (10) and Kat Finnerty (13) celebrate a point against the University of Central Missouri Jennies on Tuesday night at the Hyland Arena.
Photo by Mina San Nicolás

The Lindenwood women’s volleyball team battled the University of Central Missouri at the Hyland Arena Tuesday night and finished with a score of 3-0.

The Lions started with an early five-point lead in the game and maintained it until the Jennies powered up to beat the Lions in a 20-25 first set.

On the second set, the Jennies maintained their energy to start with an early lead and kept it to the end, as they finished 25-20.

The Lions struggled to bounce back and lead the third set. Halfway through, the Lions managed to close the gap to 13-18, but never got the lead, finishing 18-25.

“It is just key opportunities like finishing the set, staying aggressive, and we made some mental errors that we shouldn’t have made,” senior Allyson Clancy said.

Sadie Kosciuk was the top scorer for the Lions with nine kills and a .353 attack percentage. Clancy recorded 28 digs, seven assists, one block and one ace. According to the Lindenwood athletics website, freshman Hannah McGlockton played for the first time since Sept. 14 and recorded six kills without performing any errors.

“A lot of our physical skills are there but we just can’t stay focused and we can’t pay attention to those key details that we need, but if we can make those adjustments I think we can find a spot in the conference tournament,” Clancy said.

The match was the Lions’ second straight loss, bringing their record to 12-10 overall and 4-8 for MIAA conference. In order to make it to the conference match, the Lions need to win 3 matches.

The next game will be on Friday, Oct. 19 against Northwest Missouri State University at 6 p.m. in the Hyland Arena.