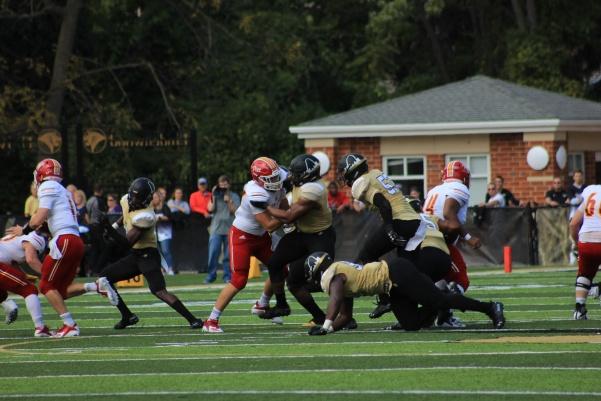 File photo from a Sept. 29 matchup between Lindenwood and Pittsburg State at Hunter Stadium.
Photo by Lindsey Fiala

Lindenwood, following back-to-back losses, rebounded and took care of business on the road this Saturday, defeating the RiverHawks of Northeastern State (0-7) 38-14.

At first, the Lions looked to be in upset consideration after the NSU defense held them to two consecutive three-and-outs. However, after a RiverHawks turnover on downs on their own 28-yard line, Lindenwood responded quickly with a Nash Sutherlin seven-yard rushing touchdown for the first score of the game.

The Lindenwood offense kept their foot on the gas, and took a 14-0 lead on their next possession. After two Cam Sanders first downs, quarterback Cade Brister hit wide receiver Payton Rose for a 43-yard touchdown towards the end of the first quarter.

After a dreadful first quarter filled with three punts and only 8 yards of total offense, the NSU offense started to gain momentum and pick up first downs. However, Lindenwood defensive back Lloyd Lockett completely erased the energy after an interception midway through the second.

The defensive dominance continued for the Lions, leaving the RiverHawks scoreless as Lindenwood headed into halftime with a 14-0 lead.

The Lions opened the second half with a very early score. A kickoff taken by defensive back D’Harius Brown was returned 83 yards for a Lions touchdown. Lindenwood took a 21-0 lead only 16 seconds into the third quarter.

After punting seven out of their first ten possessions, the NSU offense finally hit payday on their eleventh. Two back-to-back receptions of 27 and 25 yards by wide receiver Ryheem Brummitt set up the RiverHawks onto the Lindenwood 24-yard line. The Lindenwood defense managed to bring the drive to a fourth and 19 after a Jon Harris sack, but quarterback Jay Baker responded and hit running back Craig Davis for 23 yards. The next play, tight end Nick Thompson hauled in a ten-yard touchdown to cut the Lion lead to 14.

Sanders was responsible for the next score in the game. The running back rushed for 54 yards on five carries on the drive alone, and was highlighted by his 21-yard touchdown to put Lindenwood up 28-7 with six minutes remaining in the fourth.

NSU responded shortly after with a kickoff return touchdown of their own. Davis took the kick 77 yards to the house, as the RiverHawks again cut Lindenwood’s lead to 14.

The following Lindenwood possession, Sutherlin began the drive with a 34-yard rush to put the Lions into the NSU redzone. The RiverHawks defense managed to only allow a Barrett Foley 33-yard field goal with four minutes left in the contest.

Ethan Staskewicz added a late score for the Lions, as the running back converted on a two-yard touchdown plunge to officially ice the game.

The Lions look to keep the train rollin’ as they host MIAA frontrunner Northwest Missouri State (6-1) next Saturday for their annual Homecoming game.