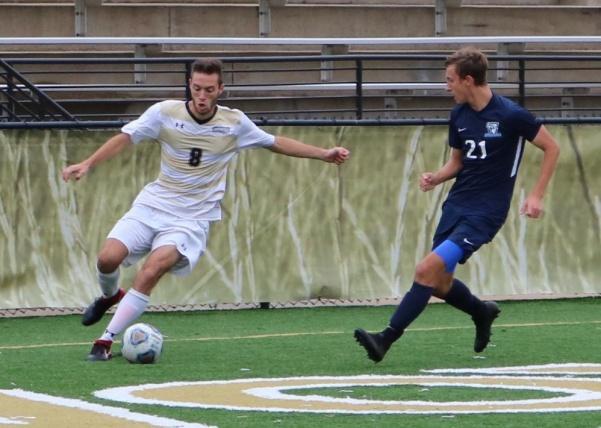 The Lions got past the Peacocks with the help of sophomore Josh Scholl’s three goals.

Lindenwood came out of the gate aggressive. They dominated possession and were making it difficult for the Peacocks to get anything going. The first goal of the game was scored by junior Gaspar Alvarez in the 22nd minute, for his eighth goal of the season. The goal was assisted by junior Jose de Gregorio and freshman Luke McBeth.

The Lions’ second goal of the half was the first of three scored by Scholl. The header from five yards out in the 34th minute was only the beginning of a big day for Scholl. He scored again in the 40th minute, this time on a takeaway by de Gregorio, who then centered the ball to Scholl where he then finished it to give the Lions a 3-0 lead.

The Peacocks were inches away from a goal when the ball slipped through the Lions’ senior goalkeeper Aleksa Nenadic’s hands, but a Lindenwood defender booted it out. The Lions would head into the half holding the 3-0 lead.

The Lions outshot the Peacocks 12-5 in the first half, with nine shots on goal to the Peacocks’ two.

In the 52nd minute, Scholl finished off his hat trick and scored on a blast from 29 yards out to give Lindenwood a 4-0 lead.

“I was looking to score, as every forward or striker or anyone who is attacking [does],” Scholl said. “I was just looking for opportunities throughout the game.”

It was Scholl’s seventh goal of the season.

Upper Iowa was able to get on the board in the 54th minute. Junior Seth Russell scored his first goal of the season and the Peacocks’ only goal of the afternoon.  Lindenwood was able to seal the 4-1 victory.

“It was a good solid win,” Scholl said. “We lost to them earlier in the season and it was a must-win game.”

With the Lions only having four games left in the season, Scholl said their conference play the rest of the way is what is really going to matter if they want a national tournament draw.

Next for the Lions, they catch Ouachita Baptist University at home in Hunter Stadium, Friday, Oct. 26 at 1 p.m.