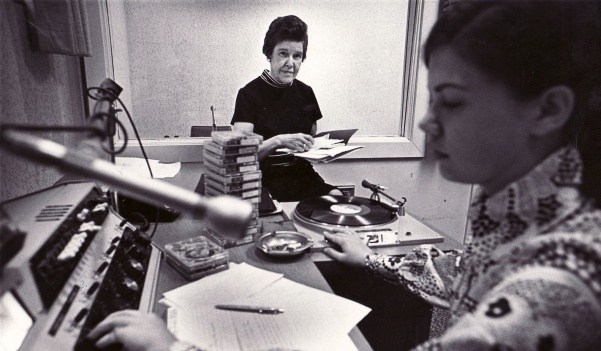 Martha Boyer, the woman largely credited with founding KCLC, helps a student doing an airshift during one of her last years at the university in 1970.
Photo from the Mary E. Ambler Archives

Lindenwood University’s radio station is celebrating its 70th year of being on air in 2018.

In the seven decades KCLC has been on the air, it has gotten a reputation for being run by students and guided by professionals. It’s also attracted some dynamic students who have gone on to become MLB sportscasters, KSHE personalities and KMOV nightly news anchors.

Greg Amsinger, a sportscaster and host for the MLB Network, is among the pros KCLC has generated.

“It was the foundation of who my friends were, the professors that influenced my life and career the most and really connected the love of broadcasting to how hard you had to work to make it in broadcasting,” he said.

Old school radio has a reputation for being rough around the edges, and KCLC is no exception — except that it was founded by a woman.

Martha Boyer started the station in 1948 to teach her all-female class how to broadcast.

Jim Wilson, who was KCLC general manager from 1979-’82 and 1984-’88, described Boyer as “somewhere between your sweet grandma and a marine drill sergeant.”

After World War II, Lindenwood College decided to offer women “technical” skills. Previously, it had been a traditional finishing school, according to Chad Briesacher, the station’s current director.

In 1948, Boyer, an Ohio State graduate that helped put its TV station on air, applied to teach women how to use cash registers.

The story goes that Boyer was given money to buy five cash registers, but instead she bought a carrier radio station and plugged it into the university’s electric grid.

But the truth, Wall said, is that Boyer told administrators a radio station should be started, but they said no money was available. What administrators didn’t know, Wilson said, was that Boyer had already made the rounds to different stations and “sweet talked” the engineers into giving her their excess equipment for free.

One of the people she convinced to give her equipment was Robert Hyland, the CBS regional manager and general manager at KMOX for 40 years.

Boyer’s connection with Hyland paved the way for 15 years of internships for Lindenwood students, Wilson said.

But Boyer did not stop at radio.  By 1949, she had talked Channel 5 executives into letting her teach TV classes after they signed off at night.  Boyer took taxi-loads of students to the studio to teach class from midnight until 4 a.m.

Because of this Lindenwood students had access to TV stations at the birth of prime time television.

Wilson said that Boyer was “transformative” to the students that she taught. He said she would encourage them and then “kick them in the a** if they drug their feet at all.”

One of those students was Glen Cerny, a member of the one of the first classes of men and KCLC general manager from 1987-2000.

“Anybody you talk to that knew her will talk about her looking over her half bifocals and giving you a death stare, and you knew damned well that you better change what you’re doing or hell hath no fury,” he said.

Cerny said the No. 1 lesson he learned from Boyer was integrity; she taught Cerny “to be good and not just seem good,” on and off air.

Boyer retired in 1972, and Wilson said when he arrived at Lindenwood in 1979, he heard so much about her that he tracked her down in Farmington, Missouri, about 90 minutes from St. Charles.

They ended up drinking two bottles of sherry together.

“I still had the build of a college football player and could hold my drinks, but she basically drank me under the table,” he said.

Martha Boyer passed away in 1988, but since then, the Martha Boyer Radio Award has been established in her name and continues to be given to students.

This story is part one of three chronicling KCLC’s history at Lindenwood.  Click here for part two.