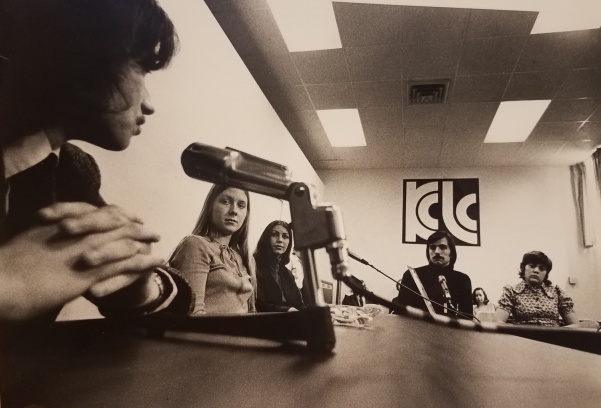 Students broadcast in the basement of the Memorial Arts Building.
Photo from the Mary E. Ambler Archives.

Lindenwood University’s radio station is celebrating its 70th year of being on air in 2018.

In the seven decades KCLC has been on the air, it has gotten a reputation for being run by students and guided by professionals. It’s also attracted some dynamic students who have gone on to become MLB sportscasters, KSHE personalities and KMOV nightly news anchors.

Greg Amsinger, a sportscaster and host for the MLB Network, is among the pros KCLC has generated.

“It was the foundation of who my friends were, the professors that influenced my life and career the most and really connected the love of broadcasting to how hard you had to work to make it in broadcasting,” he said.

By now, the AM station is used to train students and kept mainly for memory of the old days, while KCLC FM is used to broadcast music, talk and news to listeners.

Since the station’s creation it was housed in the basement of the Memorial Arts Building.

Jim Wilson applied to be general manager of KCLC because he saw potential in the program, he said.

“[The station] had a tremendous track record – despite having no money, and it had students who were very eager to move into the field, and if you’re in teaching and students are motivated, that’s 90 percent of the job,” he said.

But the first month into Wilson’s new position, Lindenwood President John Anthony Brown told him that the university would have to close the radio station by the end of the year.

By the end of the year, 150 students — five times more than before — were enrolled. The next year, half the residents on campus were communication majors, according to Wilson.

Wilson said his pitch was simple: He promised graduates they would have a job by the time they graduated in four years.

“If you want a career in this field we’ll give you a chance to not only learn it in the classroom but experience it on the air,” he said.

When President Dennis Spellmann came to Lindenwood in 1990, he began a campus-wide recruitment initiative to get the school more funding.

During construction, while Wilson was at the hardware store getting more nails, the students finished the frame.

“The only drawback was they got the doors on the ceiling; they laid the frames upside down,” he said.

After two weeks, they had built “the ugliest, most insecure, physically limited press box you could ever imagine,” Wilson said.

The program used the box office for five years, until the current one was built.

Wilson said he always thought of KCLC as a magnet that pulled people in that cared about each other and journalism. As the current director of the National Broadcasting Society, he sees a lot of students now.

“They’re talented but not the spontaneous combustion Lindenwood students were,” he said.

In 2002 “The Wood” was born. Also that year, Mike Wall, the general manager until 2016, and program director Richard Reighard changed formats to a commercial-free station and switched genres from jazz to triple A, which stands for Adult Album Alternative.

This is part two of a three-part series chronicling KCLC’s history at Lindenwood.  Part one told the story of Martha Boyer, who founded the station in 1948.  The last installment of “KCLC Turns 70” will be released on Friday, Sept. 19, looking at the successful alumni that have come from the station.