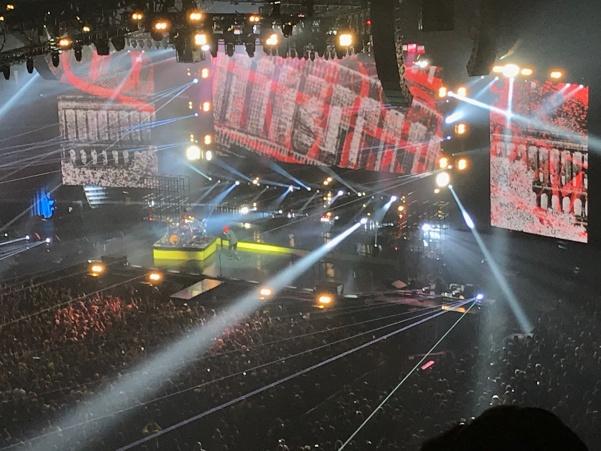 Twenty One Pilots during its St. Louis stop of the "Bandito Tour" on Oct. 19, 2018 at the Enterprise Center.
Photo by Megan Courtney

A sea of yellow took over the general admission floor at the Twenty One Pilots show Friday night at the Enterprise Center, where the band played for the first time in two years.

Yellow is the dominant color of the band’s new album “Trench,” which is about the fictional city of Dema ran by bishops. People who are trying to escape from the city wear yellow because the bishops can’t see it.

Coming on stage dressed in yellow, black and green with their faces covered in ski masks, Josh Dun and Tyler Joseph kicked off the show with a few songs from “Trench,” before moving into some songs from their 2015 album “Blurryface.”

The transition into the Blurryface era was complete with Joseph’s ukelele, floral kimono and circle-rimmed sunglasses, all staples of the era and the band’s 2016 tour “Emotional Roadshow.”

During “Nico and the Niners,” from “Trench,” a catwalk was lowered down from the ceiling, allowing for Joseph’s transition to the stage in the back of the arena, where he threw it back even further with a song from the band’s 2009 self-titled album.

On his way to the small stage from the catwalk, Joseph stopped and leaned down, grabbing some of the hands of fans who eagerly raised their hands up.

Before making their way back to the main stage, Joseph wanted everyone in the crowd to sit down for the next three songs, “Neon Gravestones,” “Bandito,” and “Pet Cheetah,” which are also off of the new album.

Max Frost and AWOLNATION opened up the show, but they also joined Twenty One Pilots on stage to cover a few songs that everyone knows, “Iris” by The Goo Goo Dolls, and “Hey Jude” by The Beatles.

Before the bands came out on stage, Joseph said he asked them to cover some songs with him on stage during the planning process of the tour.

“I was like, ‘You want to sing some songs?’ and they were like ‘Yours?’ and I was like ‘No, better,'” Joseph said, which caused the nearly 20,000 people deep crowd to erupt with laughter.

Covering all of their bases from the past albums, the band ended with “Car Radio,” from their 2013 album “Vessel,” before coming back out with an encore – something they’ve done at every show since they started their musical journey.

During the song “Trees,” which is also from “Vessel,” platforms were given to the people towards the front of the barricade to hold up. Then, Joseph and Dun came down into the crowd onto the platforms and were given their drums, which they played to the beat of “Trees” while yellow confetti filled the room.

After it was over, they climbed back up onto the stage and took a bow during a standing ovation, ending with one final line.

“We are Twenty One Pilots, and so are you.”