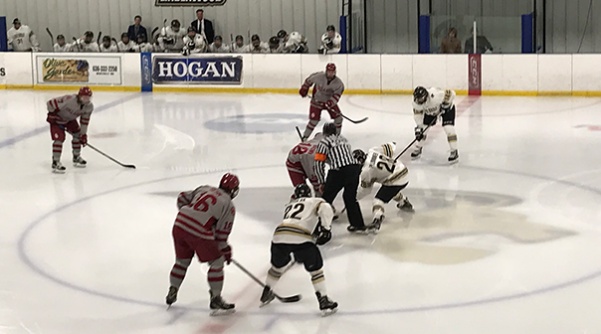 Freshman Shayne Plummer looks to win the opening face off against Oklahoma's Clayton Brown on Saturday, Oct. 20, during the opening game of Lindenwood's home series against the Sooners.
Photo by Dominic Hoscher

Over the weekend, the Lindenwood Lions debuted their new white home uniforms in a two-game set against the undefeated Oklahoma Sooners.

While their jerseys may have been new, the result was more of the same, as the Lions continued their torrid start to the season with another sweep, this time over the Sooners. Lindenwood outscored the visitors 13-4 in those two games.

“We’ve come together pretty close as a group, and I think that team chemistry is just built,” Ryan Finnegan said. “Every day, we go into practice, getting better each day and I think it’s showing the results on the weekends.”

In their opening contest of the series on Saturday, the Lions wasted no time in getting the early advantage. A mis-clearance by a Sooners defender led to the puck falling right to Finnegan, who sent his powerful shot into the top left corner to make it 1-0 Lions. Both Jordan Klimovsky and Caleb Ernst grabbed assists on the goal.

“We want to play fast,” Finnegan said. “Early in the game, when the other team isn’t expecting it we can catch them off-guard and try to pop one past them.”

The most nervy moment for the hosts in the first period came with 8:40 left on the clock. Oklahoma’s Michael Behm got loose on the break and before he could get set for his shot, Cooper Seedott dove out of the crease to check the puck away from the Sooners attacker. This kept the game steady at 1-0, which was the score going into the first intermission.

Oklahoma nearly found the equalizing goal six minutes into the second period. Sooners defender Tyler Lazarek was left alone in front of goal, and sent a blistering shot right off the post. It was all Lindenwood from there on.

With under eight minutes left in the period, a flurry of chances spurred up for the Lions. Tommy Heinzman found Zach Mitchell on an odd-man break, but Mitchell’s shot was saved by a sliding Phil Babb. Oklahoma’s luck would run out here, however, as Victor Lombardi doubled Lindenwood’s lead off of another Lions break. Just a few seconds later, Matt Runyon made it three, going down to one knee and still finding the back-of-the-net.

“We were playing really well,” Finnegan said. “It was just 1-0, we just couldn’t get that bounce. But it was nice to see that hard work finally pay off after we got a couple there in the second.”

Early on in the third period, the Lions were gifted a 5-on-3 after a pair of Oklahoma penalties. Both were killed by the Sooners, giving the visitors much-needed momentum in a game where they’ve had very little of it.

After a penalty was called on Lindenwood, the Sooners finally exploded onto the scene. Behm netted Oklahoma’s first goal of the contest off of a Aharon Lara assist. Two minutes later, Lazarez cut the Lions’ lead down to just 3-2.

Oklahoma kept firing, and kept scoring as well. From another tight angle, Isaac Bosse beat Seedott to equalize the game at 3-3. The Sooners fought back from a three-goal deficit, providing adversity for the Lions that they haven’t had to face all season.

“Our goalie Cooper backs us up each and every night, so a couple went in there and we didn’t really have one single worry,” Finnegan said. “We just wanted to go out that next shift and win that shift. We have trust in Cooper as a goalie, and trust in our team so we just took a step back and got back to our gameplan.”

Lindenwood needed an answer to slow down the flying Sooners, and that’s exactly what they got from Brendan Murphy. After receiving the puck at the point, Murphy sent a laser into the bottom left corner of the goal, giving the Lions back the lead at 4-3. Oklahoma would pull Babb with less than two minutes remaining, giving Klimovsky an empty-net goal to put the game away.

Despite allowing three Sooner goals to start off the period, the Lions bounced-back scoring twice to win by a final score of 5-3. It was their seventh win of the season to remain undefeated, and now after playing them once, Lindenwood knew what they needed to do to sweep Oklahoma.

“They block a lot of shots and get in lanes,” Finnegan said. “We need to make sure to find that lane, get around them and keep moving our feet. We’re a really fast team, so to be successful, we have to do this.”

Their quest for the sweep got off to a strong start on Sunday. Finnegan, who tallied a goal and a couple of assists the previous day, opened the scoring for the Lions on a second chance effort. It was Finnegan’s fifth goal on the season.

The first period was dominated from start to finish by Lindenwood, who led 1-0 at the

end of the first 20 minutes. Lindenwood led in shots 16-5, getting a majority of them in the later stages of the period.

Lindenwood wasted no time getting started in the second, doubling their lead early through Shayne Plummer, who slapped in his first goal as a Lion. Then, it was Klimovsky who scored Lindenwood’s third goal, which was assisted by Finnegan and Nurminen. The onslaught in the second period continued with Kyler Newman, who tallied his first goal of the year, making it 4-0 Lions.

Everyone was getting on the board for the Lions on Sunday. Newman got his second of the season later on in the period, and then the familiar face of Zach Mitchell scored his team-high ninth goal. Freshman Coltin Craigo finished off the period with his first collegiate goal, giving Lindenwood a commanding 7-0 lead.

Jake Townsend made it eight in the third period, scoring the Lions’ final goal of the last 20 minutes. Oklahoma would put an end to Lindenwood’s shutout through Lara’s first goal on the weekend. Neither team would score again, with the Lions winning 8-1, improving to 8-0 on the season.

Lions went 42-5. Their 8-1 win on Sunday is their second largest win of the season (10-0 at Robert Morris on 10/6). They’ll host the University of Illinois next weekend, where the Lions will look to improve to 10-0.