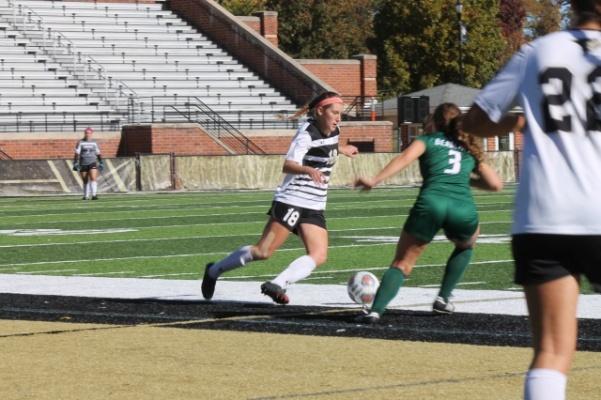 Lindenwood sophomore Alaina White (18) during the matchup against the Bearcats on Sunday.
Photo by Maria Escalona.

The Lions will play University of Central Missouri in the MIAA conference tournament on Wednesday.

The Lions finished the regular season with a 7-9-2 record overall and 4-6-1 in MIAA conference play. This gave them the seventh seed in the MIAA tournament as they run up against the second seeded Jennies.

The Lions and Jennies are no strangers to one another, as they have played each other twice already this season. The first of the two games, UCM was ranked number one in the nation and traveled to Hunter Stadium to beat the Lions 3-0 on Sep. 16. The second match up was just last Friday. The Lions traveled to the Jennies’ home field this time, and lost 3-2.

Jennies’ sophomore Haley Freeman has scored two of the Jennies’ six goals against the Lions.

UCM has a record of 14-3-1 overall and 8-2-1 in MIAA, with a win percentage of .806. The game against the Lions is being held at the Jennies field in Warrensburg, Mo. They have been nearly untouchable there this season, holding a 9-0-1 record.

Central Missouri is nothing short of a women’s soccer powerhouse. According to UCM’s athletic website, they finished with a record of 26-0 last season (2017) and won the DII National Championship. In their 2016 season they finished 21-2, and in 2015, 21-2-1. Excluding this season, they have not finished a year with under 20 wins since 2013.

There has not been much competition between the Lions and the Jennies in years past. The Jennies are 13-2-0 all-time against Lindenwood. The Lions have not been able to register a win against UCM since 1997.

The Jennies are led by redshirt senior Jada Scott. Scott has 30 points on the season, registering 13 goals and four assists. She is closely followed by senior forward Courtney Killian, who has a total of 27 points, registering 11 goals and five assists. Their third leading scorer, sophomore forward Makayla Toth, has 24 points, chalking up eight goals and eight assists. The Lions do not have one player that has registered 20 points.

It is no secret that Lindenwood is running up against a tough opponent. However, this will be the third time the Lions have seen the Jennies, and the second meeting was a lot closer than the first. The Lions are very familiar with their opponents on Wednesday and are hoping to notch their first win against them in a number of years.

If the Lions were to beat UCM on Wednesday, they would go on to play the winner of the matchup between third seeded Emporia State and sixth seeded Northeastern State in the semi-finals.