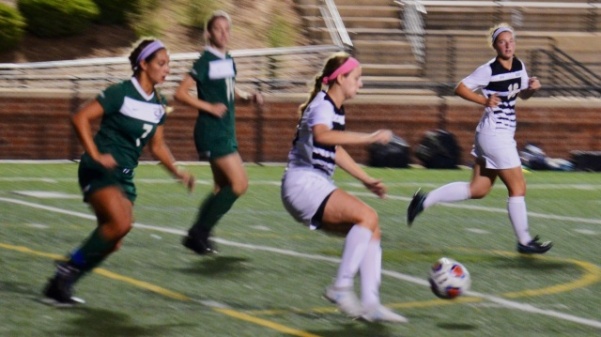 The Lions suffered a 4-0 loss in the MIAA quarterfinals to University of Central Missouri on Oct. 31.

The Lion’s first postseason appearance since 2016 did not go as planned. The Lions have had trouble overcoming the Jennies all season. This is their third loss to UCM and were outscored by a combined goals total of 10-2. This was also the second time the Jennies have shut out the Lions this season.

The Jennies heavily outshot the Lions in the first half, but minimal damage was done. They led 10-2 in shots but were only able to put in one goal. The goal came in the 10th minute by way of sophomore Makayla Toth and was assisted by freshman Makayla Martin. The Jennies took the 1-0 lead into halftime.

The Lions’ goalkeeper, sophomore Megan Swanson, made three saves in the first half. The Jennies’ freshman goalkeeper Lindsey Johnson made two.

It was in the second half where the Jennies began to pour it on. They were able to net three second half goals on seven shots. The first of the half came in the 46th minute from Jennies’ leading scorer, redshirt senior Jada Scott. Scott then added another shortly after in the 51st minute, this time assisted by junior Kelsey Mueller. The third and final goal of the game from either side came from Jennies’ freshman Payge Bush in the 83rd minute.

The win brings the Jennies’ record to 15-3-1 and projects them into the MIAA semifinals where they will run up against third seeded Emporia State.

For the Lions, their season ends with a record of 7-10-2, an improvement from their 5-12-1 record a season ago. Sophomore Morgan Weller leads the team this season, scoring 14 points, registering five goals and four assists. Tied for second in scoring were juniors Katie Richter and Sammi Gregory, each having eight points, three goals, and two assists.

Senior Jordan Wipke was named an All-MIAA third team performer and Weller was recognized as an All-MIAA honorable mention.