Lindenwood men’s hockey off to best start since 2009 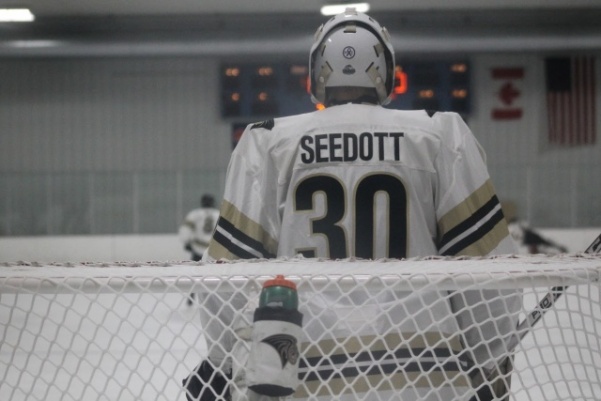 Sophomore Cooper Seedott during a game against the Illini in October. The goalie has lead the Lions to three shutout wins this season.
Photo by Kayla Bakker.

In 2009, Lindenwood’s men’s hockey team started the season 10-0, a record that stood unmatched until now.

The 2018-19 Lions have knocked off each team they’ve come up against by sizable margins. 10-0, 8-1, and 6-0 are just some of the score lines that the Lions have won by so far this season. In doing so, Lindenwood has now jumped to the No. 1 spot in all of ACHA Division I hockey.

“This start is huge for our program,” sophomore forward Zach Mitchell said. “Everyone is working hard in practice every day and doing the right things on and off the ice, and that’s why we’ve been so successful.”

The Lions team eight years ago scored 60 goals in its opening 10 contests, with names such as Cory Spradling and Chad Boeckman filling the stat sheet. Through 10 games in 2018, Lindenwood’s goal total stands at 60 once again, with Mitchell leading the charge up front for the Lions.

Mitchell has been Lindenwood’s most elite threat, out of many, in front of goal this season. He leads the team in goals with 10, and is third in points with 13.

“I have great players playing around me that help me get puck when I need it,” Mitchell said. “[Tommy] Heinzman and [Zach] Martin are my linemates and they’ve helped me a lot. During practice, we talk and discuss ways to score more goals and make more plays.”

He hasn’t been the only one who’s lit up the lamp for the Lions. Lindenwood’s leader in points is Heinzman, with 19 points (16 assists), followed by freshman Ryan Finnegan who is tied for second on the team, along with captain Jake Townsend, with 16 on the year. 15 Lions have double-digit goal tallies this season.

The Lions have been relentless on offense, emerging as one of the strongest attacking teams in the entire country over the past few months. What has truly separated them from the pack, however, is what they’ve been able to do defensively as well.

In their first 10 games, the Lions have allowed just 13 goals to the opposition. In comparison, the 2009 team gave up 15 in their 10 games to start the season.

Lindenwood has locked down some of the strongest offensive teams in the nation week in and week out. For example, the Lions held No. 10 Illinois to two goals in two games over this past weekend. No matter the opponent, they’ve been overpowering on the defensive side of the ice.

“Defensively we work together as a unit,” Townsend said. “We’re all comfortable playing with each other, and [Head Coach Rick] Zombo isn’t worried about who’s out there because we just play and roll lines in.”

The piece that has held the whole thing together is Cooper Seedott in goal. Seedott has been a brick wall between the pipes for the Lions, having a .951 save percentage with 215 saves and only 11 goals allowed.

“Unbelievable” and “incredible” have both been used to describe his play in goal so far this season, and the captain’s thoughts for his goaltender are no different.

“He’s a good goalie that helps us out a lot,” Townsend said. “What really helps us out is when he plays the puck. It helps us get out of our zone that much quicker. He’s confident in what he wants to do, and it makes it much easier for us.”

From an explosive offense to a lock-down defense and excellent goaltender, the Lindenwood Lions have earned the top ranking in the country. Central Oklahoma, Robert Morris, Iowa State, Oklahoma, and now Illinois, all have been outmatched in all areas by the Lions. With the talent that has been displayed, the Lions know what they are capable of achieving: a fourth national title.

“The goal is always to win the national title,” Mitchell said. “With the group of guys that we have this year, we can do it as long as we stick with the system and compete with each other each day on and off the ice.”