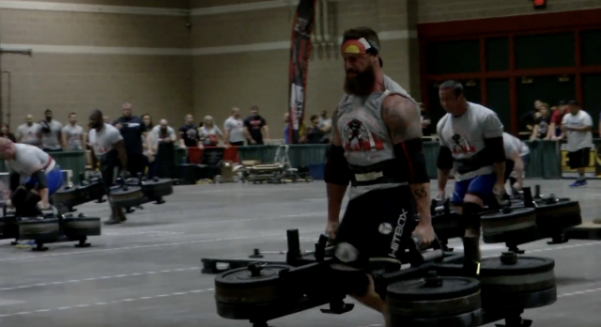 A Strongman competitor crosses the finish line for the frame carry event on Oct. 27 for the North American Strongman Championships.
Photo by Kayla Drake

The Strongman Corporation has existed in St. Charles for over a decade, but this is the first time a competition has been held in the convention center.

Over 200 amateur weightlifters qualified to compete — both men and women. If the athletes placed well, they could get a chance to become professional.

“This is a good chance to qualify for the amateur world championships and for a chance for a lot of the amateurs to get their pro cards,” said Ulice Payne III, a Strongman competitor and personal trainer.

Competitors were from all over North America, from Hawaii to Canada. All 50 states were  represented by Strongman athletes.

“Honestly weightlifting is my happy place,” she said. “I’m in a very stressful job, so it takes a lot of pressure off of me when I’m in the gym, lifting heavy.”

The sports sales manager for the St. Charles Convention Center, Chris Wilson, said he reached out to the Strongman Corp. because he thought it was a good economic opportunity for St. Charles.

“We’re talking about overnight stays, restaurants visits,” he said. “And when these athletes eat, they really eat.”

Wilson said he welcomed the idea of hosting the championships again next year if offered the chance.

The North American Strongman Championships were the qualifiers for the Arnold World Championships, as named in honor of Arnold Schwarzenegger. It will determine if some athletes go professional or not and will take place in March in Columbus, Ohio.