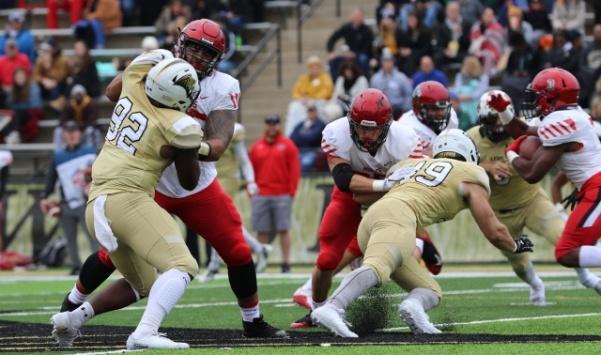 Lions defensive end Arsante Conners (92) and linebacker Nate Blanchard (49) get shut down by the UCM defense, paving a way through the line for their quarterback Devante Turner (3).
Photo by Kayla Drake

In their final home game of the season, the Lindenwood Lions fell to the University of Central Missouri 31-28 on Saturday.

Coming into the game with a 3-6 record, Lindenwood was looking to end their two-game losing streak and get their first home victory this season.  However, the Lions lost to UCM for the eighth time in the teams’ NCAA history.

In their matchup last season, the Lions were up by two scores with 14:08 remaining, but went on to lose to the Mules 24-31.  Though the Lions lost by a slimmer margin this year, they never held the lead during Saturday’s game.

UCM started off the scoring with a three-point field goal by Alex Langer from the 22-yard line early in the first quarter.

The first touchdown was scored from a two-yard rush by UCM running back Koby Wilkerson. A few minutes later, running back Devante Turner caught a 42-yard touchdown pass from the Mules’ redshirt freshman quarterback Jeremy Hunt.  With a kick from Langer, this brought the score to 17-0, which it remained until the end of the quarter.

But on Lindenwood’s first posession in the second, the Lions brought the score to 7-17 by way of a four-yard touchdown rush by quarterback Cade Brister.

Lindenwood later scored its second touchdown from a Brister pass to tight end Erik Henneman from seven yards out. However, the Lions failed to hold UCM back for the whole quarter.  After a timeout to address their waning lead, the Mules retaliated on their next possession with a 35-yard touchdown reception by wide receiver Kyrion Parker. The Lions entered halftime down by 10.

The back-and-forth continued when Henneman caught a 13-yard pass from Brister for Lindenwood’s third score with two minutes left in the third.  With a kick by Barrett Foley, the Lions again narrowed UCM’s lead to 3 points.

At the beginning of the final quarter, the Mules restored their comfortable advantage when Turner brought in a six-yard touchdown rush.  But with 1:10 left in the game, Lindenwood scored again when Brister hit wide receiver Paul Silvio for a 16-yard touchdown.

The game brought UCM’s record to 5-5, and the Lions are now 3-7.  For their final game, the Lions will face the Missouri Western State Griffons in St. Joseph, Missouri on Saturday, Nov. 10.