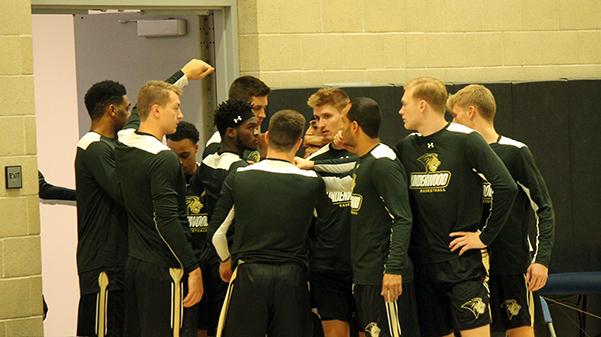 The men's basketball team huddles before a game at the Division II Tip-Off Classic in Orange, California.
Photo by Scott Mandziara

The Lions started their season strong with a 2-1 showing in the Division II Tip-off Classic in Orange, California.

The first of their three games this weekend was against Azusa Pacific University on Friday. They found themselves trailing the Cougars in the first half of this one, 37-28. The Lions may have been shaking off some rust in their first game of the season. They shot 31.4 percent from the field, 20 percent from three-point range, and 44.4 percent from the free throw line in the half.

Junior transfer Chris King came off the bench and played 14 minutes in the half, registering seven points to lead the way in scoring for the Lions. Junior guard Mandrell Worthy led the way at the half for the Cougars with 10 points.

The second half was a much different story for the Lions. They caught fire and outscored the Cougars by 25 in the half. King again led the way for the Lions, making seven threes in the half and scoring 21 points, a strong debut for the guard transfer. The Lions made nine threes in the half and shot 53.3 percent from the field. The big second half gave the Lions their first win of the season, by a score of 77-61. The Lions’ bench outscored the Cougars bench 41-12, led by King. He ended his day with 28 points, shooting 10-14 from the floor and 8-9 from three.

Their second game of the weekend came against the No. 4 ranked team in NCAA Division II, West Texas A&M University.

This one was a bit of a heart-breaker for the Lions, as they led by as much as 15 over the Buffaloes.  The Lions took a 37-30 lead into half-time, holding the Buffaloes to just 1-13 from three and 11-28 from the field. Senior forward Drew Moore led the way for the Lions at the half. He had 10 points and six rebounds, and was on his way to a career day. Senior guard Brad Newman also had 10 points for the Lions in the half.

The Lions held the lead until late in the second half. West Texas went on a 16-0 run that gave them their first lead of the game. The Lions cut the lead to one with 30 seconds left on the clock. The Buffaloes made two free throws to push their lead back to three. In the final seconds of the game, Lindenwood missed two potential game tying three-pointers. The Lions would lose 65-62.

The Buffaloes outscored the Lions 35-25 in the second half.  For the Lions, Moore finished his day with 20 points and 15 rebounds, a career best in both categories.

Their third and final game of the weekend came against Embry-Riddle University on Sunday.

The game against the Eagles was a high scoring affair that the Lions led the entire way. The Lions took a 52-39 lead into the half with Newman leading the way with 13 points. Senior forward Chandler Diekvoss was right behind Newman, scoring 11. The Lions were on fire in the half, connecting on 69 percent of their shots.

The Lions would take their lead up to as many as 19, and eventually win 94-81. They ended the game with six players scoring 10 points or more. Newman ended the game with 17, Diekvoss with 15, followed by sophomore forward Diego Womack with 14 off of the bench.

Next for the Lions, they travel to Mankato Minn. to take on Minnesota State University, on Nov. 9, at 5 p.m.