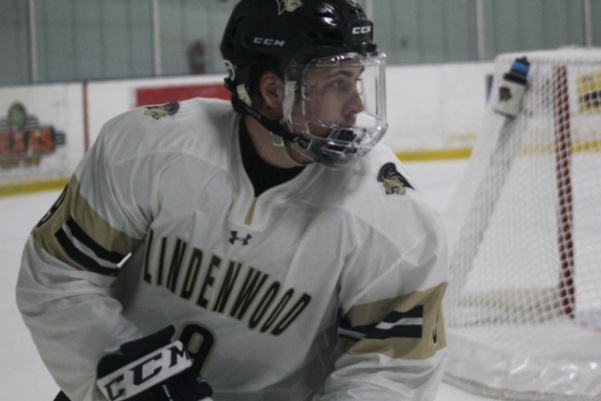 Forward Tommy Heinzman during a game against the Illini in October.
Photo by Kayla Bakker.

On the road for the first time since early October, the Lindenwood Lions looked to complete a season sweep over the Oklahoma Sooners in Oklahoma City.

After a win in the series opener on Saturday, Lindenwood outdueled Oklahoma on Sunday, in what turned out to be their tightest game of the season, to complete yet another sweep.

The show got started Saturday evening, when the Sooners challenged the Lions offense like no team has this season. In the first period, Lindenwood tallied up the shots, leading 10-7 in that category at the end of the period but were struggling to find the back of the net. It was the first time the Lions were held off the scoresheet in the first period since their season opener against Central Oklahoma on Sept. 21.

As most teams have learned this season, this Lions team can only be held down for so long. The offense found its form in the second period, with captain Jake Townsend opening the scoring for Lindenwood after getting free in the slot on the power play. The visitors’ lead was doubled minutes later again on the power play, as Brendan Murphy got on the board to make it 2-0 Lions.

A third unanswered goal was in store for Lindenwood heading into the third. Point leader Tommy Heinzman continued his stellar season with his team’s third goal of the day, on yet another power play. Oklahoma would answer back with about seven minutes remaining, but that would be all for the Sooners on Saturday as they fell to the Lions by a 3-1 final tally.

If Saturday’s game had the Lions on edge, then Sunday’s certainly did as well. The first 10 minutes were similar to the previous day’s opening period, with neither team jumping out in front of the other in terms of scoring. A power play would change that for the Lions, as leading scorer Zach Mitchell got the Lions on the board with his 11th goal of the season.

Oklahoma answered back a few minutes later with a goal of its own to knot the game at one apiece. This score would last through the remainder of the first, as the Sooners were continuing to challenge the Lions all weekend long.

The Sooners’ strongest and most promising showing came in the second period. Just under four minutes into the period, they got their second of the day to make it a 2-1 game in favor of Oklahoma. It took the Lions up until the end of the period to bounce back, but after going a man down, freshman Hayden Ursulak scored his first collegiate goal on a shorthanded breakaway to level the game at 2-2.

In what had been a rather uncharacteristic evening for the Lions, they finally struck in the third period and looked like their No. 1-ranked selves once again. Shayne Plummer put Lindenwood ahead in the early stages of the third, and was followed up by Mitchell who scored his second of the game.

These two goals would prove to be decisive, as the Lions won by a final score of 4-2. Despite being pressed over the weekend more than they had been coming into the series, Lindenwood proved why they are the top-ranked team in the country, outscoring the Sooners 7-3 in the two games. The Lions will now return home next weekend for a date with the Arkansas Razorbacks.