Women’s volleyball eliminated in first round of MIAA tournament 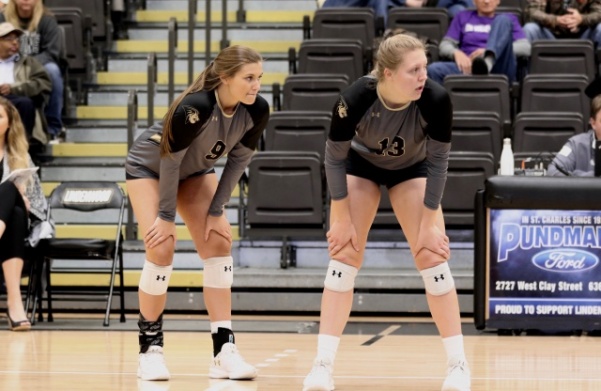 The Lindenwood women’s volleyball team lost 3-0 in the first round of match play Tuesday night in Edmond, Oklahoma.

After sweeping their last two home matches to secure the sixth seed, the Lions fell to No. 3 Central Oklahoma in a three-set match and got eliminated from the MIAA championship.

Alexa Pressley led the Lions the entire match with 13 kills and a .312 hitting percentage. Senior Allyson Clancy also scored 36 assists and six digs. As a team, the Lions beat UCO in total kills (39-35) and attacks (117-106).

Bailey Dvorak, one of the two seniors graduating this year, said it is surreal that her collegiate career is now over.

“Emotions have been high for the last week or so, and once the last point ended, it all just hit me,” Dvorak said. “I’m going to miss the competitiveness and the game in general.”

Dvorak added that the freshmen class has a lot of talent that could benefit the team next year.

“I hope that the team has a great spring and that they go in with a positive mindset and the will to get better so they’ll come back even better next year,” Dvorak said. “I am going to miss my teammates since they have made a huge impact on my life, and I am thankful for my past teammates for making a major impact as well.”

According to Masseyratings.com, the Lions played the 32nd toughest schedule in NCAA Division II. The Lions closed their season with an overall 16-14 record (8-10 in conference matches) and finished in the sixth position in MIAA rankings as well.