Lindenwood football to visit MWSU for final game of year 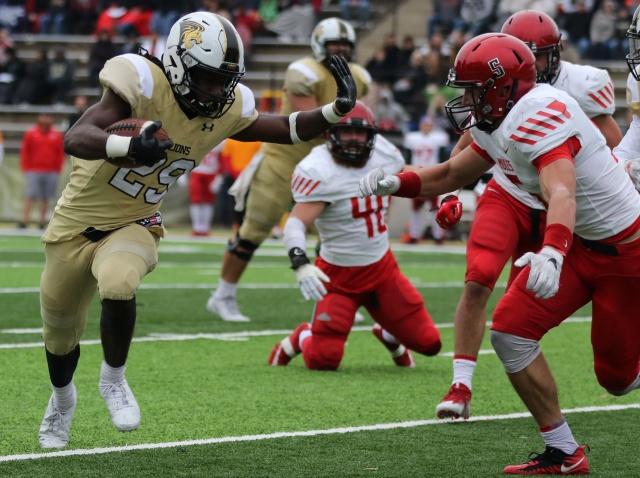 During a home game against UCM, running back Nash Sutherlin (29) blocks running back Dylan Albertson (5) to attempt a touchdown in the fourth quarter.
Photo by Kayla Drake

Lindenwood will play their final football game of the year as they travel to St. Joseph, Missouri to take on the Griffons of Missouri Western State (6-4) at 1 p.m.

Last week, LU dropped their final home game of the season to Central Missouri (5-5) 31-28. The comeback effort in the fourth quarter wasn’t enough as the Lions’ loss moved their record in Hunter Stadium to 0-5.

Although the loss was hard to swallow, Lindenwood’s effort wasn’t disappointing.

In the Senior Day matchup, both the Mule and Lion offenses combined for nearly 1,000 yards of total offense, and Cade Brister once again showed why the quarterback position at Lindenwood will certainly be a lock for years to come.

The redshirt freshman got it done through the air and on the ground: passing for 312 yards and three touchdowns, while rushing for a season-high 120 yards and a touchdown.

Offensively, Missouri Western looks to their bell cow, James Bailey Jr., to carry their rushing attack. His statistics this year place him towards the top freshmen running back rankings; his nine rushing touchdowns on the year are good for fourth out of all freshmen in the nation, while his 638 rushing yards place him seventh out of all freshman backs.

On the other side of the ball, the biggest playmaker the Griffons have defensively is cornerback Brandin Dandridge. Dandridge’s four interceptions on the season are good for second in the MIAA, and his 15 passes defended not only place him first in the conference, but fifteenth in the entire nation.

The Lions are losers of four straight against the Griffons, including last year’s 40-8 loss.