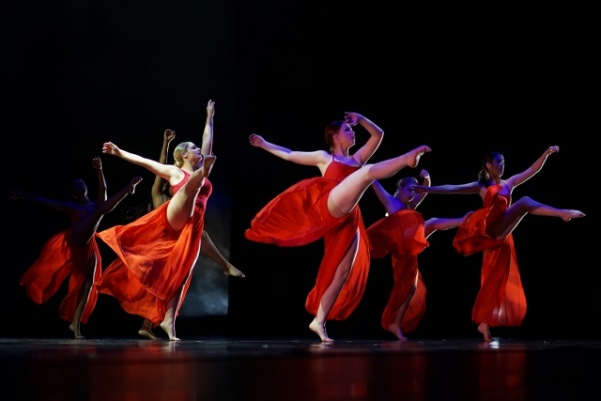 The annual Fall Dance Concert this weekend will feature audience interaction in new ways for the 10th anniversary of the Scheidegger Theatre.

Associate dance professor Tricia Zweier said this show will break the fourth wall by starting a dance in the crowd and experiment with clothing and stage setups.

In total, 11 dances will make up the performance, with nine choreographed by faculty and two by students.

Zweier collaborated with mass communications assistant professor Ed Voss to incorporate a video feed using LUTV equipment. Zweier said she wanted to project a big screen image during her piece, “Shifting Perspectives,” because the space in the Lindenwood Theatre sometimes feel cavernous, and details are lost.

Dance major and sophomore Christi Bell said the time commitment before the show is worth it because the community, her family and friends get to come see the final product, but it’s mostly worth it to see herself accomplish.

“Internally, to know that all this hard work is paying off and these late night rehearsals and struggling to get homework done wasn’t for nothing,” she said.

Lindsay Hawkins, the choreographer of “Dissent,” wrote in the program “a huge thank you to my cast of strong women for lending me your movement ideas, voices and hearts.”

Another piece that is straying from the traditional structure, is a purely improvisational piece that starts in the audience after intermission, suitably titled “Making It Up As We Go.”

Zweier said the dance program stands out at Lindenwood because the students train for versatility, practicing several forms of dance.

An example is “When the Gods Danced,” choreographed by associate dance professor Janet Strzelec. The piece was originally made for men, but three women will be performing it this weekend.

The hardest lesson Bell learned for this show was understanding “not all dances are made for the enjoyment of the audience,” she said.

The dance concert will be showing Thursday through Saturday night, starting at 7:30 p.m.

To see our photo coverage of the event, click here.