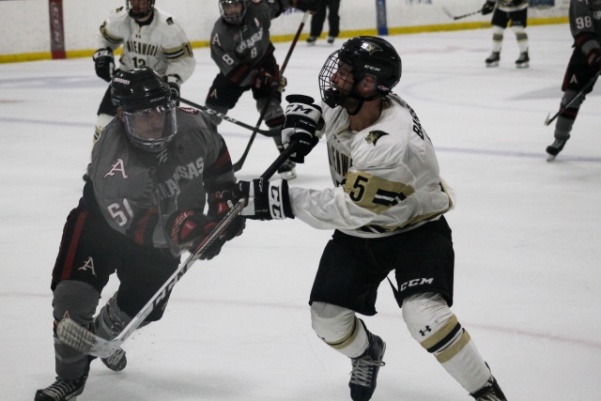 In their last home series of the first semester, the No. 1 Lindenwood Lions had their strongest performances this season against the Arkansas Razorbacks.

Thanks to an unstoppable offense and unbreakable defense, Lindenwood swept Arkansas in blowout fashion, winning both games by a combined score of 25-3.

“Even though they don’t have the strongest record, we knew right away that we couldn’t overlook them,” junior Nick Greene said.

It might have taken the Lions 10 minutes to get the offense going on Saturday night, but when they did, they refused to look back. First it was Greene who was able to find the back of the net against the Razorbacks. Senior center and leading point scorer Tommy Heinzman found Greene right off of the faceoff with space in front of Arkansas goaltender Jozef Dusenka, and the junior forward made no mistake, scoring his first goal of the season.

“It felt good,” Greene said. “It is definitely something that can play mind games with you and once you get that off, you can just focus on playing hockey and just relax from there.”

Greene’s celebration, however, wasn’t as smooth as his goal, falling right on his back while skating over to the far side of the ice.

“There’s a term ‘There’s a monkey on your back,’ and I think he wanted to stay on my back a little longer, and he took me down,” Greene said.

Lindenwood would score two more in the first through Caleb Ernst and Zach Martin, who was making his return from injury and proved his importance to the Lions’ front. It was Martin’s fourth goal of the year, and Ernst’s third.

The second period on Saturday was Lindenwood’s most dominant one yet, scoring an incredible seven goals in 20 minutes. Junior defender Brendan Murphy lit up the Razorbacks with a hat-trick in that period alone, and was followed up by the Lions’ leading goal scorer Zach Mitchell who got two in the period. Also scoring were a pair of freshmen in Ryan Finnegan (first game back from injury) and Hayden Ursulak, giving the Lions a 10-0 lead after two.

It was much of the same in the third, with the Lions scoring five goals in the final period. Already with two on the night, Mitchell scored twice to improve his season tally to 16. Ursulak got his second, Alex Kalau found his first, and freshman Blair Barrows netted his first goal of his collegiate career.

The final on Saturday night was 15-0 in favor of the hosts, their most lopsided victory of the season. Lindenwood out-shot Arkansas 77-11, flying on the offensive end and giving the Razorbacks no room to maneuver on the other one. Cooper Seedott earned his fourth shutout in the win.

“The guys were just battling,” Greene said. “Guys have been reading off of each other lately, feeling good, and it’s contagious. One guy [scores], the next guy does it, it’s pretty fun to watch.”

Sunday’s game was a bit closer, but still the Lions showed their class with another statement victory. Lindenwood opened the game up with a three-goal first period where they out-shot the Razorbacks 17-4. Murphy, Jordan Klimovsky, and captain Jake Townsend got the goals for the home side.

Arkansas was finally able to break through in the second period. The Razorbacks cut the Lions’ lead to just one after two goals in the opening five minutes. Their fun wouldn’t last for more than 15 seconds, as Heinzman answered back, restoring Lindenwood’s two-goal advantage. The Lions would go on to score three more goals in the period, with Ursulak, Kyler Newman and Austin Wilk getting on the board.

With a 7-2 lead, Lindenwood was in cruise control heading into the third. Klimovsky and Kalau both scored in the first four minutes of the period, and Kalau would score another on the power-play at the end of the third as well. Arkansas’ Luc Gradisar would sneak one in between the goals, but Lindenwood still won won 10-3.

Freshman goaltender Mike Errico got his first victory of the season in the win. Lindenwood is now 14-0 after a series that saw the Lions completely overwhelm the Razorbacks in two games. They will conclude their first half next weekend in a tough road test at Ohio.

“We have Ohio next weekend, so we’re preparing ourselves this weekend by not taking our foot off the gas and keeping that momentum going this week into next,” Greene said.