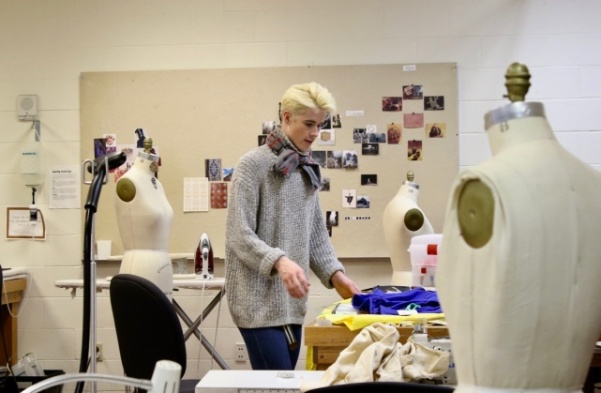 Adam Brewster, 22, works on his pieces at the fashion studio in Scheidegger on Friday, Nov. 16. Brewster is a senior and will present his line "Continuum" on the Fall Fashion Show in The Emerson Black Box Theater at Scheidegger on Dec. 7.
Photo by Merlina San Nicolás.

On the volleyball court, he is unstoppable. In the fashion studio, he is outstanding. On campus, Adam Brewster is known as the “white chocolate wonder.”

Brewster, a 22-year-old Lindenwood University student from Lee’s Summit, Missouri, plays for the men’s volleyball team while majoring in fashion design and will be part of the last generation to graduate with that degree.

Not only did Lindenwood run fashion shows and had a high-quality fashion program, it was also one of the three programs in the country to have both the major and a Division 1 men’s volleyball team.

“[Fashion] is something I am passionate about,” Brewster said. “It is one of the main ways in which I express myself.”

Brewster’s fashion inspiration comes from Coco Chanel, a French fashion designer that popularized “casual chic.” Chanel played with the idea of gender roles and what is strictly feminine or masculine in fashion.

“She is one of the main reasons I am in fashion to begin with,” Brewster said. “Usually I keep bottoms form fitting around the waist and butt and tops cropped and baggy.”

Currently, Brewster is working on his senior collection called “Continuum”, which is inspired by the art movement of constructivism. It is defined by geometric shapes and bright colors. The line will be shown at Lindenwood’s fall fashion runway on Dec. 7.

Following the idea of constructivism, several of his pieces are able to transform. Models will walk the runway and turn pants into overalls and pose for two different pieces, within the same outfit

Although the senior collection is an individual work, Anna Heinold, a fashion design major and Brewster’s best friend, worked closely with him, and they fed each other ideas and opinions on what works and what doesn’t.

“I was so proud of him on his accomplishments with this collection,” Heinold said. “His concept of things changing over time came really through in his pieces with the transforming of the garments as they walk the runway.”

While trying to pull off a very ambitious idea that required many trials and errors and all-nighters, Brewster is also the setter for the men’s volleyball team.

Brewster comes from a family of seven kids and all have played competitive volleyball, six of them collegiately as well.

“I absolutely love volleyball,” Brewster said. “I have no memory of not playing, so it feels like I was born into it.”

Brewster was first recruited to Lindenwood as a libero, a position that specializes in defense skills, but has almost always played as a setter. After graduating, Brewster hopes he can play at a professional level overseas while also working inside the fashion business.

Brewster’s short-term goals are to make his last season the best one of his collegiate career and help the team reach the conference match.

“I would love to get 3,000 assists, be All-Conference and make this year’s team the best it has been since I got here,” Brewster said.

But before the season starts in January, Brewster has had to overcome several problems that have kept him away from the courts.

Over the summer, Brewster had surgery on both of his legs due to a condition that developed overtime called Exertional Compartment Syndrome, which causes muscles and nerves to get damaged or die. Far from the physical challenges the surgeries presented, mentally it was a burden for Brewster.

“It is tough maintaining a positive view of yourself when so much of my identity has been my sport,” Brewster said. “To not be able to compete or at least compete at the level I used to currently is proving to be very draining on me emotionally and mentally.”

Joe Kosciw, the head coach of the men’s volleyball team, said he has high regards for Brewster’s work ethic and passion for the game. Brewster grew up playing in the Kansas City area, where volleyball wasn’t a popular sport and decided to move to St. Louis to improve his game.

“He also has a high IQ for the game, he knows when he needs to talk to a player to regain confidence, as well as knowing what play to run to create 1-on-1 situations or put us in the best position offensively,” Kosciw said.

Kosciw and Brewster’s relationship has grown stronger over the years. Before becoming the head coach, Kosciw was an assistant coach and would talk strategy with Brewster, but now he trusts him enough to make the play decisions by himself.

“He’s grown so much in his four years here and I know he is going to continue to lead in a great way this year,” Kosciw said.

Although Brewster is a senior about to graduate, the White Chocolate Wonder persona will linger.

Whether it is to inspire self-expression or to push athletes to their highest potential, the originality and eccentricity of Brewster will be remembered at Lindenwood as intriguing and fabulous at the same time.