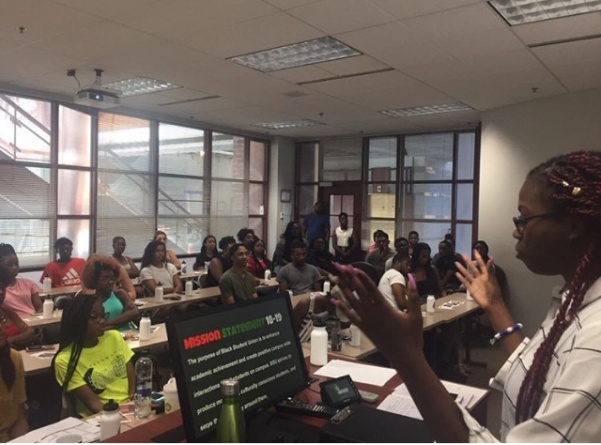 Students gather at a BSU meeting in the Spellmann Center.
Photo by Bria Heard

Lindenwood’s Black Student Union gives students a voice about their culture, but the organization welcomes all ethnic backgrounds.

“We’ve had three Caucasian females in our meetings, our previous treasurer was from the Caribbean Islands; we have a lot of different races here,” said Ciara Griffin, BSU president.

BSU is always looking for change on campus, and they’ve been awarded most community service hours for the 2017-2018 academic year. Their mission is to create positive interactions among students.

“The Black Student Union is the epitome of change on campus,” said Darren Barnes, an adviser.

Culture never falls short for the BSU. Previous events held in the past such as “Don’t Touch My Culture” and “Don’t Touch My Hair” were created to help students understand other cultures and backgrounds.

BSU meetings used to strictly be about business. Now, coupled with business meetings, they’ve incorporated “Discussion Time,” and during this time, students interact and express their opinions on topics given without fear of being an outcast.

“Without the Black Student Union, it would be students with a voice, but nothing to make it acceptable,”  said Barnes. “It’s my release.”

Barnes said people who “seek growth and have a drive” are the types of people that make up the BSU.

Editor’s note: In an earlier version of this story, Darren Barnes’s title was incorrectly stated. He is not a BSU adviser. This has since been corrected. We apologize for the error.