Lindenwood’s star field hockey goalie got her start on ice 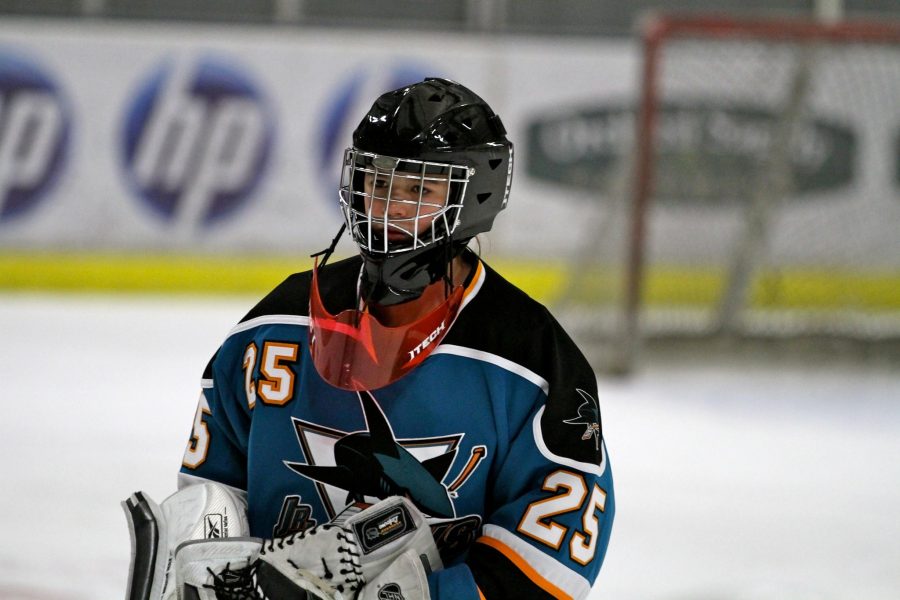 Although Starbeck now calls the turf home, she got her start goalkeeping for the San Jose Girls Jr. Sharks team where she later placed second in the national championship with her team.
Photo from Skylar Starbeck.

Lindenwood’s standout field hockey goalie may seem like she been born with a stick in her hand, but it wasn’t always turf under her feet.

Skylar Starbeck, the 5-foot-7 dark-haired, tan-skinned and brown-eyed San Jose native got her start in hockey at a roller rink when she was 9.

A year later she tried out for the ice version.

“We were a big San Jose Sharks family and some of the players would come into my dad’s restaurant, and he thought it was a pretty cool sport, so he put my brother and me in that too,”  she said.

Starbeck started as an out-player for her club hockey team, but they didn’t have a goalie. Before tryouts in June, her dad asked her if she wanted to give playing goalie a shot. She did and spent the entire summer practicing before regular season play began in September.

From there, she went on to play for multiple club teams in the San Jose area, including the San Jose Junior Sharks, the Anaheim Lady Ducks and the Madison Capitals in Wisconsin.

“Being goalie, Skylar was so supportive of us as out players,” former Anaheim Lady Ducks teammate Lilli Marchant said. “She was encouraging, always knew how to pick up the team when we were down, and she knew how to tell the difference between being serious and also being a fun-loving teammate.”

“We even played against each other when she played for the Junior Sharks. I can’t say scoring on her was easy, but I can’t say it was hard either,” Marchant said laughing.

When Starbeck entered high school, field hockey wasn’t on her radar. But with her background as an ice hockey goalie, the field hockey team at Archbishop Mitty High school in San Jose focused heavily on recruiting her.

“My sophomore year of high school, I played water polo, then soccer in the spring,” she said. “The field hockey coach was kind of trying to recruit me because they heard I played ice hockey, so I decided to try a couple of summer camps and play field hockey goalie to see if I liked it. I tried out and ended up making varsity my sophomore year.”

Her father Jeff Starbeck said the two sports complemented each other, so it was easy for her to make the transition.”

“It was fun to watch the championship games as well,” he said. “Good father-daughter bonding time.”

Starbeck said her first year playing, the team made it to the region championships.

“We were winning 1-0 in the second half with 10 minutes left to play, and they took a stroke against me, and I stopped it” she said.

Her team went on to win the championship game.

While balancing school and field hockey, Starbeck continued to play ice hockey at the club level. Her prowess in both sports even garnered the attention of Cal-Hi Sports, an online sports show covering California’s high school sports.

Cal-Hi Sports aired a four-and-a-half-minute documentary-style feature on Starbeck, who was a sophomore in high school at the time, detailing how she went straight from the field to the ice to continue practicing the sport she loves the most: ice hockey.

When it was time to choose a college, Starbeck looked for opportunities to continue playing ice hockey.

“I wasn’t even really considering Lindenwood,” she said. “Then one week my dad kind of forced me to tour here since it’s so close to Iowa where he lives. I knew a few girls here who showed me around the campus and showed me what their field hockey program was like. I still wanted to play ice hockey at this time, but Lindenwood’s women’s ice hockey team wasn’t looking for a goalie ,so I didn’t really consider it.”

Within days of touring Lindenwood, the field hockey program made her an offer. Lindenwood gave Starbeck three weeks to decide where she wanted her educational and sporting career to go.

By her junior year, Starbeck was chosen as the Eastern College Athletic Conference (ECAC) goalie of the year and earned a shutout against Limestone College to become the ECAC Division II champions. She has been co-goalkeeper of the year twice in a row, and first overall in goals against average for the National Collegiate Athletic Association.

Between school, work, and sports, Starbeck has still found time to be thankful, though.

“Even though I’ve achieved a lot in sports, I’m even more grateful for the people I’ve met and the friendships I’ve formed throughout my sporting career. I wouldn’t be here without my friends and family,” Starbeck said.